Crete, Illinois — August 22, 2017 — “Terrifically successful!” are the words HITS Founder and CEO, Tom Struzzieri chose to describe the first week of FEI CSI4* competition at HITS CHICAGO Balmoral Park during Showplace End of Summer II. “The FEI has already approved the same dates for next year as a 5*,” added Struzzieri. “Adding Balmoral Park to the highest ranked competitions in the world will make for an even more spectacular High Performance tour leading into the 2018 Saugerties Million, World Games, and Gold Cup.”

Bull Run Jumpers agrees. In their first outing at beautiful Balmoral Park, Bull Run’s head trainer Kristen Vanderveen topped two of the three FEI CSI4* classes. For several weeks now, the Wellington, Florida-based Show Jumping Team has been traveling throughout the country. “When the horses got here [Balmoral Park], they really took a breath,” remarked Vanderveen.  “With all of the open space and the grass, they really felt at home.” 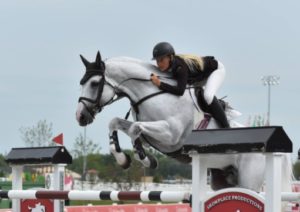 BULL RUN’S FAUSTINO DE TILI is a stunning white 12-year-old Belgian Warmblood Stallion. Vanderveen has been partnered with him for three years. She refers to him as ‘FROSTY’ and praised him immensely for his stellar performance in the Grand Prix.

“The course was plenty big enough, and it asked a lot of questions,” noted Vanderveen of the Anderson Lima de Moura-designed track. “On the course walk, I thought the Liverpool line was tough and quite big, and the last line was especially challenging with its really tall and skinny 1.60m Vertical to the big Adequan Oxer.” Of the 45 who took center stage in the Grand Prix Stadium to compete for the $66,000 top prize, only 6 qualified to advance to the seven-effort jump-off.

First to challenge the shortened track was Nicole Shahinian-Simpson atop AKUNA MATTATA. The pair had the advantage of already winning two $50,000 Grand Prix in this Stadium. Simpson and her feisty 9-year-old mare delivered a fault-free round that looked unbeatable in a blistering time of 46.70-seconds.
Vanderveen did not see Simpson’s round, but she said she knew it was fast … really fast, and that Akuna Mattata is fantastic, and super careful.

By the time Vanderveen entered the Stadium, fifth in the order-of-go, Simpson remained the one to beat. HANDY VAN HD and Alberto Michan, and VDL BRAVO S and Hunter Holloway had each collected four jumping faults. DINGEMAN, a nine-year-old Dutch Warmblood gelding ridden by Santiago Lambre produced a clean-round, but nearly two full seconds behind Simpson in 48.60.

“I made a plan to go in the ring and lay it out,” recounted Vanderveen. I knew Margie [Engle] was coming behind me, and she is always so fast that I had to go all out for the win — even if it meant a rail.” FROSTY showed up for Vanderveen. Despite a deep spot to the Liverpool Oxer, FROSTY carefully powered high and wide, and finished the short course in 45.89 seconds to gain the lead. “He was so good to me, he really fired for me in the jump-off, and he stayed careful in a flat out run to the finish.”

With Margie Engle and ROYCE last to go, Vanderveen’s lead could have been momentary. But when ROYCE rolled off a rail, it was Vanderveen’s name that etched its way into the newest chapter of Balmoral Park’s evolution – For complete results, Click Here.

On Thursday, August 17, 2017, forty-six entries started in the $34,900 KindredBio Welcome FEI CSI4*. The course consisted of 12 elements, including three double combinations for a total of 18 jumping efforts in round one. Vanderveen felt that de Moura had built the course a bit on the soft side.  The real test she said, lay in negotiating the track within the tight time allowed of 75-seconds. “It is challenging for horses to be on a forward gallop for the whole course, and continue to stay careful and scopey,” clarified Vanderveen. “And in the jump-off, it was simply a matter of who was the bravest, and who wouls stay the most careful in a full run.” For Vanderveen and BULL RUN’S TESTIFY everything showed up perfectly and the seasoned pair bested the field.

The victory marked the first ‘major’ win for BULL RUN’S TESTIFY whose consistency has helped Vanderveen excel into, and gain confidence as she stepped into higher level classes. With great fondness, she said that TESTIFY is her comfort horse. “He was my first really big 5* horse, and he is so steady, and always does his job.”

Vanderveen was overjoyed with the victory, “This win was particularly exciting because TESTIFY has consistently been the ‘bridesmaid’ – this was a flat out race and he really surprised me.” TESTIFY completed the eight effort jump-off in 38.00 seconds.

Of the 46 entries, 9 advanced to the jump-off, and 6 produced double-clear rounds. Lisa Goldman and CENTURION B stopped the clock at 38.19 for second place. For full results, Click Here. 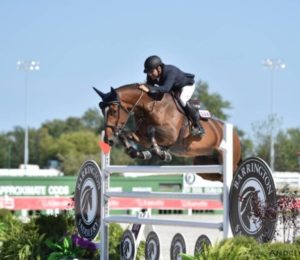 On Friday, August 18, Mexico’s Santiago Lambre entered the winner’s circle with DOLORIS when the twosome topped the 40-horse field in the $52,500 SmartPak Classic – FEI CSI4*.  Of the 40 starters, 16 performed fault-free in round one, of which 10 jumped clean again in round two. The win is the most significant to-date in the phenomenal winning streak Lambre has been on this summer with DOLORIS. In the SmartPak Classic Lambre and DOLORIS secured the Blue Ribbon by shaving nearly one full second off the time of Marilyn Little who placed second on Karen O’Connor’s CLEARWATER. For complete results, Click Here.

On Saturday evening, August 19, Balmoral Park glowed with the promise of nighttime horse sport for the first time since the end of Harness Racing at the venue in 2015.

As a crowd of neighbors from Crete settled into the Grandstand, all eyes curiously gazed into the Grand Prix Stadium which had its footprint over the beloved oval’s stretch drive. For many onlookers, this was the first time they had experienced Show Jumping. One-by-one, forty-three exhibitors mesmerized spectators as they made their way through the $10,000 Marshall & Sterling 1.30m Jumper Classic. 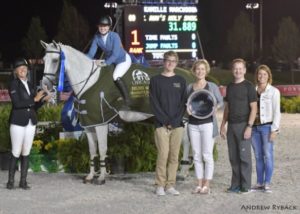 Of the forty-three starters, twenty jumped fault-free, and advanced to the jump-off immediately. Of those twenty, ten produced double-clear rounds, and each earned a ribbon and a check.  The top spot went to by Kamille Marcussen, a student of Vanderveen, who stopped the clock at 31.889 atop her fleet-footed BULL RUN’S HOLY SMOKES. Emanuel Andrade placed second on CORTINA 186 when he crossed the finish line in 32.196 seconds.

Vanderveen knows HOLY SMOKES very well, she had competed in 5* competition on the mare last year. This year, Marcussen is benefiting from that mileage as she begins her own journey into High Performance Competition. Concurrently, HOLY SMOKES is on a timetable of her own, she is now four months pregnant with Frosty’s first baby. For complete results, Click Here.

Vanderveen is laying over her Bull Run Team at Balmoral Park, her new home away from home, before shipping to Saugerties for the Million. “This is such a great facility,” she said. “The horses absolutely love the space, the footing, the grass, and all the paddocks.”
Photos courtesy of Andrew Ryback Photography | Media Contact: Susan@HITSShows.com