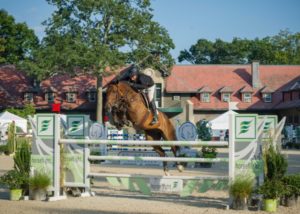 Gladstone, N.J. – Aug. 21, 2017 –Monmouth at the Team came to a conclusion at Hamilton Farm, headquarters of the USET Foundation, Sunday with an exciting $10,000 Mini-Prix, sponsored by Horseflight. Cassandra Kahle, who entered three horses for Redfield Farms and trainer Emil Spadone, earned first, second and fifth in a highly competitive field.

Out of the 32 entries, 15 progressed to the jump-off of Skip Bailey’s technical course. Kahle was blazing fast on Exite, owned by Redfield Farms, setting the time to beat of 33.130 seconds. With a jump-off round timed at 34.270, Ibrahim Barazi and Softbeat, owned by IB Stables, came close to catching Kahle. He held on to the second-place position until Kahle returned on Blue, a Redfield Farm homebred, and beat her own previous time with Exite at breakneck speed, timed at 32.945. 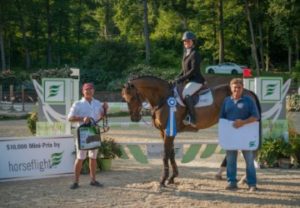 “I thought the course was a really well-designed,” Kahle said. “There were a lot of options; leave one out or add one in, depending on the horse. The footing was fantastic. I’m not the bravest rider out there, so to go that fast I have to feel pretty comfortable with the footing. I was pleased with that.”

Kahle hails from Langley, British Colombia, Canada. She moved to the area four years ago to work for Spadone and Redfield Farm. “I started riding Blue as a 5-year-old,” she said. “He’s 8 now. It’s been really fun to see him grow up and progress, He’s fast across the ground and he doesn’t spend a lot of time in the air. That may be where he beat Exite, who has a little more hang time. Exite is also 8 and he has been very competitive up to 1.35m. He’s small but has a huge stride.” 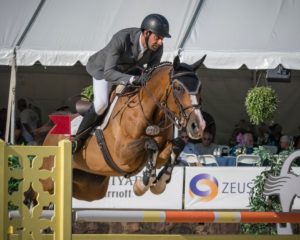 Spadone was pleased with his rider’s success. “She’s really developing as a rider and she’s having a great summer,” he said. “It was a great show. Michael and Tucker did a great job of running the show. It’s a beautiful facility. We’re happy with our first year here and we’re coming back.”

Spadone is a managing partner of Horseflight, along with Bastian Schröder and Seth Vallhonrat. Horseflight is the global leader in equine air transport. They ensure the safety and well-being of horses in transport, coordinate with their clients’ timetables and are known for their integrity. To learn more about Horseflight go to: horseflight.com