On Saturday, Nicole Shahinian-Simpson and AKUNA MATTATA, Silver Raven Farms’ feisty mare, mastered a Manuel Esparza-designed course to win the $50,000 AIG Grand Prix. On Thursday, the dynamic pair placed fifth in the $25,000 Smart Pak Welcome. “She is a blast to ride,” noted Simpson. “I had her mother, DRAGONFLY, so I’ve known her since birth. She is actually a triplet.” Simpson has developed all three who are now nine-year-olds, and says the major quality inherent in each is their willingness to compete. “She [AKUNA MATTATA] has been very game from the get-go, so it’s a lot of fun to compete with her.”

Before she became a broodmare, DRAGONFLY was a top horse for Simpson. The pair won multiple Grand Prix, competed in Nations Cups for the USA, and earned a spot on the short list for the 2008 Olympic Games in Hong Kong.

At Showplace Spring Spectacular III, June 20-25, 2017, Simpson and AKUNA MATTATA won the 1.40m $5,000 Johnson Horse Transportation Open, then the $50,000 HITS Grand Prix. And for the second time, Simpson reiterated, “The footing here is fantastic and quite a bit different from what we show on throughout the year.”

Emanuel Andrade, at the age of twenty, has already amassed a string of high profile victories and international competition appearances, including the 2016 Rio Olympics. He was born in Caracas, Venezuela, and makes his home-base in the United States in Wellington, Florida. 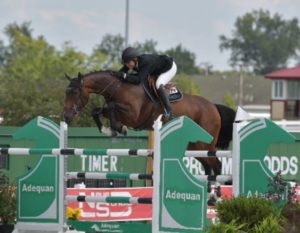