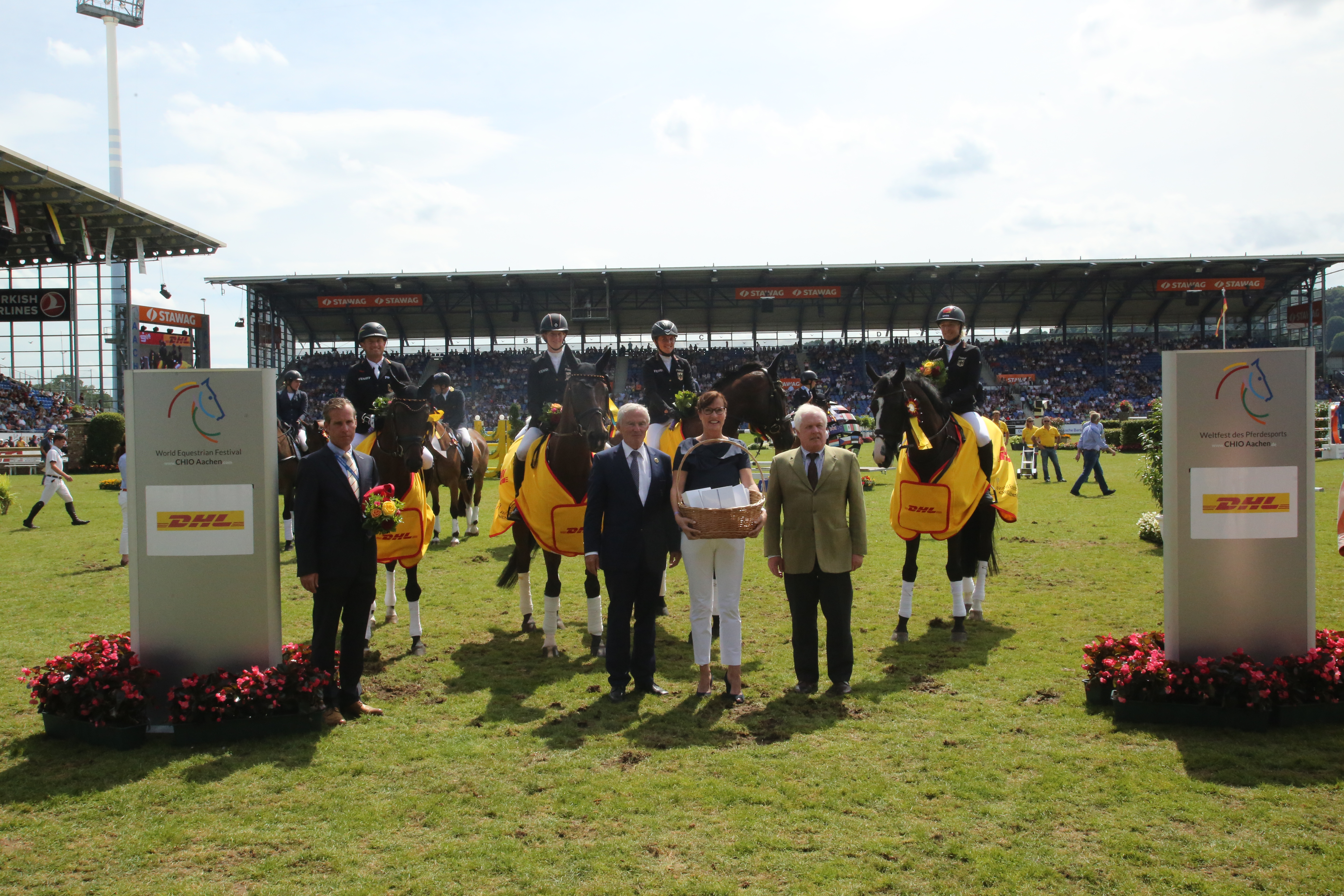 Aachen July 21st 2017-Mission possible! “We are going to claim the Cup back”, was the declaration by Hans Melzer with regards to the DHL Prize. And his riders did just that.

Ingrid Klimke with Horse Ware Hale Bob OLD, Michael Jung with La Biosthetique-Sam FBW, Sandra Auffarth with Opgun Louvo – the dream team took the victory again. And have added a new member to the family. Josefa Sommer and her own-bred and own-trained Hamilton fulfilled all expectations on their first appearance at the Soers. “It is incredible to be here with these three heroes!”, was her concise and eloquent summary on the podium at the press conference, after jumping clear in the cross-country, apart from picking up a few time faults. “Josefa was our pathfinder today and she did a super job!” said the national coach, praising the newcomer.

With an overall score of 107 minus points, the German team headed the field with a significant lead ahead of last year’s winners from Australia, who finished on a total score of 152.60 minus points. Shane Rose who came third in the individual classification with the Holstein-bred CP Qualified, said on behalf of his team: “It is no defeat, coming second behind the German team. This team has been almost unbeatable for years. I am delighted and grateful that we are able to ride here in Aachen. The conditions, how we are looked after – I wish there were more shows like this in the world.” His fellow team members were Christopher Burton with Nobilis (6th place/40.60), Katja Weimann with BP Cosmopolitan (22nd /74.50) and Emma McNab with Fernhill Tabasco (28th/85.40).

Third place on a total score of 160.60 went to Sweden, who were only represented by three riders, so there wasn’t a scratch result. However, they didn’t need one. The 2012 Olympic silver-medallist from London, Sara Algotsson Ostholt, came eleventh with Reality (47.80), directly ahead of her team colleague Louise Svensson Jähde with Wieloch‘s Utah Sun (48.20). Niklas Lindbäck and Focus Filiocus came 20th (64.60).

The Master of Riding, Ingrid Klimke, has won the DHL Prize twice in her career. After retiring her World Champion horse SAP Escada FRH, her partner in success in 2015, from active sport a few months ago – she is now taking on her new tasks as a brood mare – Bobby (official name Horseware Hale Bob OLD) is her number one. And he really does do everything in his power to do justice to this status. After a good dressage (34.50) Bobby made sure that no faults were added to the score in the jumping or cross-country and thus secured his rider the victory.

Only two tenths of a point separated the 3-time Olympic gold-medallist Michael Jung with La Biosthetique-Sam FBW and the winning pair. The course had been a major topic of conversation beforehand. The national coach, Hans Melzer, said in advance: “It’s like a Championship course! It is going to be difficult to stay under the time. In retrospect Melzer explained: “The conditions were top, the footing super! So one can ride a little faster without risking injuries.”
Michael Jung said: “I didn’t find the cross-country course more difficult than in the past years. The fact that the start had been changed, one could canter away faster and was able to get into a good rhythm faster.” Ingrid Klimke, who rode last and thus had to wait on the warm-up place alone before riding off, confirmed: “Bobby wanted to take off straight after Sam and set off at such a pace at the beginning, that we were much faster than I’d planned at first.” But we did a lot of canter training at home in preparation, so we had plenty of energy towards the end and succeeded in reaching the finish safely.”
Shane Rose who ranked third explained: “The course was built so that the horses gained more and more confidence the better one rode. And the difficult tasks then became no problem at all.”
The Show Director, Frank Kemperman, thanked Rüdiger Schwarz and his team for assuring that the participants and spectators encountered top conditions today on the cross-country track. He also reported that although six pairs were eliminated, all of the riders and horses were in good health.