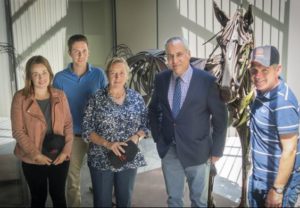 A delegation of four international grooms representing the three Olympic disciplines were welcomed to FEI Headquarters in Lausanne (SUI) by FEI President Ingmar De Vos this week to participate in the inaugural Grooms Working Group meeting.

The first meeting of its kind, the working group was created following a recent survey among National Federations to determine the best way to improve communications and interaction with grooms and what the FEI can do to help them.

As part of a day of very positive discussion, it was agreed by the working group that there was a need to establish a more formal relationship, with grooms being officially welcomed into the FEI Family through being registered with the FEI. Registration would facilitate further development of education systems, creating a more structured framework for cooperation between the FEI and grooms.

In addition, the FEI is taking significant steps towards producing applications and other tools which will best serve the grooms, allowing them to streamline preparation for upcoming events.

“Grooms play an absolutely vital role in our sport, especially in preserving the welfare of our horses, but often they go unnoticed and unrecognised, so this new working group has been set up to change that and establish an official relationship with these very important members of our community”, FEI President Ingmar De Vos said after this week’s meeting.

“It is vital for the sport and for the development of our global equestrian community to have a solid support network, and for the FEI to offer assistance and education where necessary. Grooms are truly worth their weight in gold, and we want to provide the finest resources and tools that will help increase knowledge of best practices and standards. Forging better relationships with our grooms is only the beginning. We want to help them share their knowledge with the wider community for the benefit of the sport globally.”

“I felt very honoured to be invited by the FEI to talk about the future of the grooms”, said Dressage groom Alan Davies, who works with British Olympic stars Carl Hester and Charlotte Dujardin.

“I am super excited about the fact that the FEI want to do things to help the grooms and improve everything, which at the end of the day is for the welfare of the horse as well. It was a great meeting, we talked a lot about amazing new features and things which can be developed. It won’t be easy and it is going to take some time to put in place but it will be a fantastic project.”

Brent Kuylen (BEL), who has worked with Dutch Jumping world champion Jeroen Dubbeldam, and Nanna-Riikka Nieminen (FIN), who previously groomed for two-time Olympian Henrik von Eckermann of Sweden, both agreed that the day had been a “great experience” and were looking forward to future initiatives.

“I think this is a real step forward”, British Eventing legend William Fox-Pitt’s groom Jackie Potts said. “It’s good to try and keep the standards up, and use the experience and the knowledge that some of us have gained over the years, in keeping welfare a priority and keeping grooms in the industry as well.”

Following this initial meeting, the FEI will now focus on the key components of integration, registration, education and communication. Membership of the Working Group will be expanded to include grooms from other disciplines, with the next meeting planned for 2018, ahead of the FEI World Equestrian Games™ in Tryon (USA).