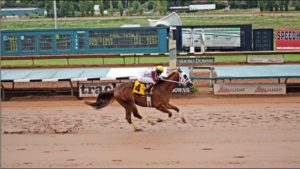 The $100,000 Corona Cartel, for horses who did not qualify for the Rainbow Derby, is also on Saturday’s program and features last year’s Grade 1, $1-million Rainbow Futurity runner-up Paint My Pilot.

First post time is 1 p.m. and there is always free parking and free general admission.

Hold Air Hostage earned the $40,000 supplemental fee his connections paid to enter the trials when he won the Grade 2, $297,000 Heritage Place Derby by one-and-three-quarter-lengths on June 3 at Remington Park. If he wins the Rainbow Derby he will earn $483,000, a 12-time return on that $40,000 investment.

A gelded son of Apollitical Jess, Hold Air Hostage overwhelmed his trial competition by two-and-one-quarter lengths and his time of :21.414 for the 440 yards was the fastest mark from the 11 trials to the Rainbow Derby.

Trainer Judd Kearl will have Rodrigo Sigala Vallejo riding Hold Air Hostage from the eighth post position. He was also the jockey in his Rainbow Derby trial.

Paragon Farms LLC’s High Plains Perry should be dangerous in the Rainbow Derby. The winner of the Grade 1, $1-million Texas Classic Futurity in December is in top form. He finished third by a nose in the Grade 1, $800,000 Ruidoso Derby while Tough To Bee and Magical Jess finished in a dead heat for the win.

Regular rider Ricky Ramirez will be aboard High Plains Perry with the third post position for trainer Trey Wood.

Nueve Racing’s Apolltical Chad, a $38,000 Ruidoso Select Yearling Sale purchase, had a stellar two-year-old campaign with his win in the Ruidoso Futurity and a fourth-place run in the Grade 1, $3-million All American Futurity. The gelded son of Apollitical Jess was sixth as the favorite in the Ruidoso Derby and then made the strong run in his Rainbow Derby trial.

Trainer Wes Giles will have Larry Payne on Apolltical Chad when they start from the inside post position.

Owned by breeder Bobby Cox with Homero and Kristen Paredes, Duponte was the only other $40,000 supplemental nominee to enter the Rainbow Derby trials. The son of American Runaway was fourth behind Hold Air Hostage in the Heritage Place Derby and then was a commanding one-and-one-half length winner of his Rainbow Derby trial in :21.615 (eighth-fastest qualifier).

Jose Amador Alvarez picks up the mount on Duponte for trainer Kearl with the sixth post position.

Double A Ranch, Inc.’s Paint My Pilot returns in the 440-yard Corona Cartel after narrowly missing the win in his Rainbow Derby trial by a head as the 6-5 favorite. That was his 2017 debut and he should move forward off that effort.