Eagle Jazz and Uptown Dynasty should be the strong favorites in the Rainbow Futurity. 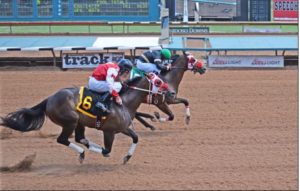 If either Uptown Dynasty or Eagle Jazz win the Rainbow Futurity and then go on to win the Grade 1, $3-million All American Futurity, the connections of that horse earn the $4-million All American Triple Crown Bonus and the horse would become the all-time leading money-earning quarter horse at more than $6.2 million.

Melvin Neugebauer’s Uptown Dynasty is now three-for-three this summer at Ruidoso Downs. His sole setback came in his career debut when he was second in in his Sam Houston Futurity trial.

Trained by Wes Giles, Uptown Dynasty won his Ruidoso Futurity trial by one-and-one-half lengths and had the lead in the Ruidoso Futurity. The Mr Jess Perry-sired gelding gamely raced to the dead heat with the late-running Eagle Jazz.

Cipriano Uscanga Vidana has been aboard Uptown Dynasty in each of his starts.

“If he hadn’t come out of the Ruidoso Futurity at 100 percent, then we would have passed the Rainbow Futurity.”

Larry Rice’s Painted Wine Wagon is peaking at the right time. The Edie Willis-trained filly won her maiden in his final start at Remington Park and then made her Ruidoso Downs’ debut with the gritty second-place effort behind Uptown Dynasty.