The horses with the next five-fastest times each day gain priority to race in the $100,000 Rainbow Juvenile, also on July 23.

Rodrigo Sigala Vallejo rode each of the Kearl-trained qualifiers.

There was no doubt that Eagle Jazz was the best horse in the third trial. The powerful, glistening sorrel gelding surged to the lead and then kept accelerating along in the inside rail. He went on win by an expanding three-and-one-quarter lengths. The son of One Dashing Eagle was timed in :19.606 for the 400 yards as the 1-5 favorite. 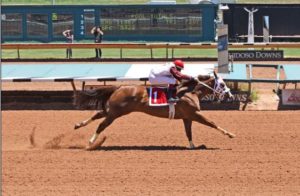 Eagle Jazz has been sensational and has the opportunity to take all three Grade 1 futurities at Ruidoso Downs — the Ruidoso, Rainbow and All American futurities. The only horse to perform the feat was world champion Special Effort in in 1981.

The gelding stumbled at the start of the Grade 1, $1-million Ruidoso Futurity, gained his stride and courageously rallied to catch Uptown Dynasty and finish in a dead heat for the win.

Before he came to Ruidoso Downs, Eagle Jazz competed at Remington Park. He won his first two starts and then lost a head-bobbing finish in the $1-million Remington Park Oklahoma-bred Futurity and settled second place.

David E. and Margaret Brown’s Lena Cartel, a $40,000 Ruidoso Select Yearling Sale purchase, won the first trial by and easy two lengths as the even-money choice. The daughter of Carters Cartel was clocked in :17.715. 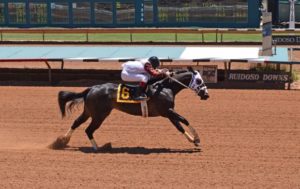 Lena Cartel made her first start since a third-place run in the Grade 2, $484,000 Sam Houston Futurity on April 29.

“She got wiped out at the start of the Sam Houston Futurity or, I think, she could have won it,” said Kearl. “She’s had some rest and should move forward off this race.”

Starfield took command at the start of the eighth trial and dominated by two-and-one-quarter lengths. The athletic looking son of Fdd Dynasty, a $102,000 Ruidoso Select Yearling Sale purchase, posted a time of :19.774. 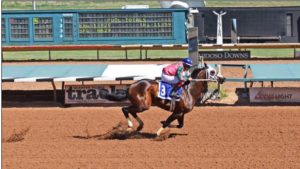 The colt was second in a maiden race at Sam Houston Race Park before making his Ruidoso Downs’ debut in the Ruidoso Futurity trials. He won his trial by three quarters of a length as the 8-5 favorite, however did not qualify for the finals

“He was my pick at the sale,” said Kearl as Starfield was walking away from the winner’s circle. “He was a grand-looking colt like he is now. The owners didn’t want to spend more than $100,000, but I said I’d throw in $2,000.” Kearl didn’t need to add his potential two-percent.

“I think he will step up after this race.”