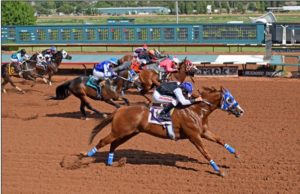 RUIDOSO DOWNS, New Mexico (July 1, 2017) — Johnny Trotter’s Bodacious Eagle made an incredible run after leaping into the air at the start to win the Grade 3, $50,000 Higheasterjet Handicap on Saturday afternoon at Ruidoso Downs.

Bodacious Eagle, in the 10th post position, made a surprising leap in the air as the gates opened and nearly unseated the athletic jockey Ricky Ramirez.

“He was back in the gate and went forward just as the gate opened,” said Ramirez. “I want to see the replay, but when we landed I know I only had my toe in a stirrup.”

Therefore, Apollitical Ok was awarded second place and Silk Cartel was moved up to third place.

The day belonged to Bodacious Eagle and Ramirez’s memorable ride.

Bodacious Eagle came to Ruidoso Downs after an unbeaten spring at Remington Park for trainer Trey Wood. The gelding won the Grade 2, $50,000 Eastex Stakes by a dominating one-and-one-half lengths and then won the Grade 1, $100,000 Leo Stakes by a neck over Zoomin Effortlessly at the Oklahoma City track.

“He’s been my favorite since he was born,” said owner Trotter, who purchased Bodacious Eagle as an embryo. “He’s a champion. He qualified for the Ruidoso, Rainbow and All American futurities here (at Ruidoso Downs).

Trainer Wood said that Bodacious Eagle is on top of his game right now as a five-year-old. The well-balanced, strapping son of One Famous Eagle is “just a good horse,” said Wood. “He loves being on the outside (in the starting gate). The next goal is the All American Gold Cup.”

The eventual second- and third-place finishers Apollitical Ok and Silk Cartel are each trained by Joel Valeriano Jr.

In the 400-yard Adequan Ruidoso Derby Challenge, Irma Vargas’ Maxx was with the leaders within the first 100 yards and then showed why he was the even-money choice. He drew out and withstood a mild bid from runner-up Rock About It to win by three quarters of a length.

Maxx, with Jose Amador Alvarez aboard, was timed in :19.613 over a fast track that had received slight rainfall a few minutes before the start of the race.

Rocking J Running Horses’ Rock About It finished a neck in front of third-place runner Born To B Bad.

Maxx was disqualified from a win in his Sam Houston Derby trial and then a close second in the $198,000 Sam Houston Derby before coming to Ruidoso Downs. The gelding by Pyc Paint Your Wagon made his local 2017 debut in the trials to the Adequan Ruidoso Derby Challenge and responded with a neck win as the 7-10 favorite. His time of :19.555 was the top-qualifying mark.

The Tammy Kay Johnson-trained Rock About It won his Adequan Ruidoso Derby Challenge trial by a head. In his prior start, the gelding by Rock Solid Jess was sixth in the Grade 1, $297,000 Heritage Place Derby at Remington Park.