Stephanie Gripp and Gun N For Glory sweep the Levels 3, 2, 1 and Youth Championships

Draw 18, in a field of 32 riders in the second section of the NRHA Non Pro Derby finals, Hollywood Starburst ‘burst’ into the Jim Norick Arena with NRHA Two Million Dollar Rider Mandy McCutcheon in the saddle. The score to beat was the 221.5 posted by past NRHA Non Pro Derby Champions Dr. Bill Rhoads and Mega Maggie Mae. The NRHA Hall of Famer riding the 4-year-old mare by NRHA Six Million Dollar Sire Hollywood Dun It and out of Chic Olena Starbuck nailed each and every maneuver requested by NRHA pattern 10 and, once the duo had closed their run, a 224 appeared on the score board and remained unbeaten. 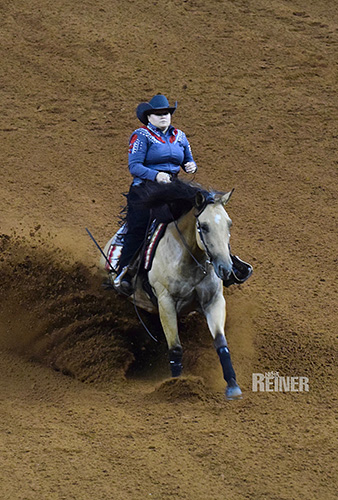 “Our run tonight went well from the start, and I could not have asked her to be any better,” said Mandy McCutcheon. “My husband [NRHA Million Dollar Rider Tom McCutcheon] rode her as a 3-year-old, and my dad [NRHA Hall of Famer and Three Million Dollar Rider Tim McQuay] rode her a little this spring. [NRHA Professional] Debbie Brown – who trains for us – really put in a lot of time into her in the past two months and really helped me figure her out. I had a pretty good run on her in Tulsa, but not so good a run at the NRBC. We put our heads together to figure out what links were missing, and it worked!”

Bred, nominated, and raised by Sarah Willeman of Turnabout Farm Inc., Hollywood Starburst was born at Mandy and Tom McCutcheon Reining Horses in Aubrey, Texas. “Tom actually sold her to one of our customers last year and showed her at the NRHA Futurity, where he had a little trouble with her,” added McCutcheon. “This past Spring, we bought her back and sold a couple of horses at the futurity last fall so that we could have a spot for her. It’s hard to go wrong with a good Dun It mare!”

Past NRHA Non Pro Derby champions and current go-round leaders, Dr. Bill Rhoads and his 5-year-old mare nominated by Martin Bonneson, Mega Maggie Mae (Magnum Chic Dream x Cinco De Mega), settled for co-reserve honors. “I was unfortunate to draw first tonight, but she was awesome for me, and I couldn’t have asked for more,” Rhoads said.

Tying for reserve honors with Rhoads was Sandra Bentien of Auburn, California, riding Gotta Twist It Up (Spooks Gotta Whiz x Make It With A Twist). The 4-year-old mare is owned and was nominated by Bentien. 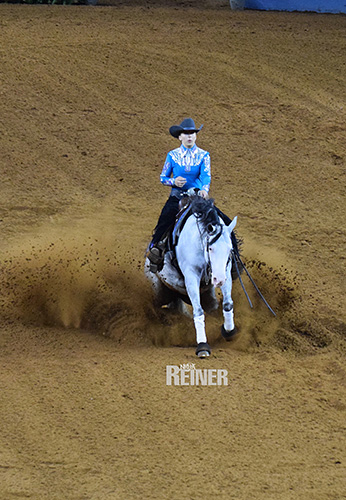 Stephanie Gripp of Sheffield, Illinois, qualified her 5-year-old AQHA and APHA double-registered mare Gun N For Glory (Gunner x Dun It For Chex), nominated by Oldenburg Farm LLC, in all four levels of the Non Pro Derby. With a 219 score, the 16-year-old left the pen with the Level 3, 2, 1 and Youth Non Pro Derby Championships! “This is amazing…if I can put words to it. This was the first time I made it to the level 4 finals, and it’s simply unbelievable,” said Gripp. “My score was held for a little bit, so I was panicked a little bit and couldn’t breathe. When they finally announced my score, I was just thrilled. I was very happy with how my horse did, and I’m very thankful to have her.”

Earning the reserve championship in the L2, L1, and Youth divisions were Coded N Karma (Electric Code x Whiz N Snap) and Raeanna Thayn. The 6-year-old gelding is owned by Robert and Robbin Thayn and was nominated by Couture Reiners. The duo scored a 218 for the titles. 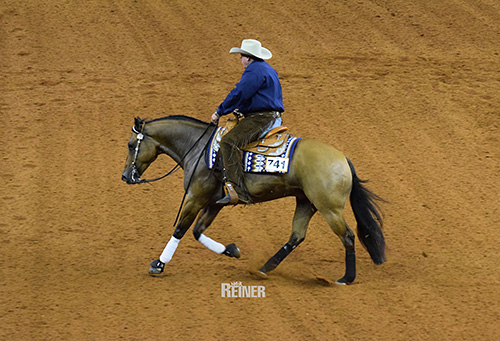 Michael Garnett and his Snoop Around (Walla Walla Whiz x Sneaking Out Tonight), nominated by Joanne Garnett, claimed both the Prime Time Non Pro and Masters Derby Championships. Micheal and his wife Joanne raised the 6-year-old gelding. “I let him trot out of a rollback today, that was my fault, but he showed really well,” said Garnett following the finals. “He’s very honest in the pen, in fact the last time he was shown was last year at Vegas. He’s not been schooled since then or been shown anywhere. He came out to show like this today and in the prelims, so I’m real happy with him!”