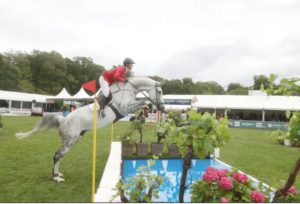 Runners-up from Luxembourg surprise even themselves; last leg in Gijon will decide second qualifying spot

Team Belgium confirmed their return to Europe Division 1 when sealing promotion with a definitive victory at the sixth leg of the FEI Nations Cup™ Jumping 2017 Europe Division 2 League in Roeser (LUX) today.

Taking command with the only zero score of the first round they added just six more in round two without calling up their anchor partnership, while the hosts sprang a major surprise when finishing a superb second ahead of the United Arab Emirates in third.

Belgium cannot now be overtaken at the top of the Division 2 leaderboard after an extremely effective campaign, but the battle for the second available spot in next year’s 10-nation Division 1 series and the FEI Nations Cup™ 2017 Final in Barcelona (ESP) in September will continue at the last leg in Gijon (ESP) next month. The British look set to take it, but another less than sparkling performance today failed to improve their position.

“We knew at the beginning of the year that some of our top riders would compete at Global shows during the season so from the start we planned to give opportunities to many riders, and I’m very, very happy that it has worked out so well! I’m very proud of them all – it means a lot to be back in Division 1 next year! ”

Pathfinder Nicola Philippaerts (24) was the only Belgian to fault in the first round, but his clear with H&M Harley vd Bisschop second time out was followed by Catherine Van Roosbroeck’s (29) effortless double-clear with the stallion Gautcho da Quinta. So although Dominique Hendrickx (43) and Bacardi les Hauts collected six faults for a stop after an unfortunate slip on the turn to the influential penultimate triple combination, that was good enough to ensure that Vilm Vermeir (37) and Iq van het Steentje didn’t have to go again because victory was already assured.

The crowd held their breath as a battle for runner-up spot ensued between first-round four-faulters Luxembourg and Switzerland. Christian Weier’s single error was followed by two from Victor Bettendorf second time out, but when Victor’s sister Charlotte Bettendorf went clear and anchorman Marcel Ewen picked up just a single time fault it fell to London 2012 Olympic champion, Switzerland’s Steve Guerdat, to pin the hosts, now on a final total of nine, back to third. A mistake in the triple combination put paid to that however, dropping the Swiss to fourth behind the impressive UAE foursome.

Now lying third with 180 points, Luxembourg could challenge the British for that much-sought-after second-place finish on the Division 2 leaderboard with another good performance in Gijon (ESP) next month. “That possibility was presented to us today, but we’ll have to see as a team if it makes sense” said Christian Weier however. “It’s a nice spot to be in, but we mustn’t get carried away. We’ve just a small string of horses!”