GRAND PRAIRIE, Texas (Thursday, June 29, 2017) – Local rider Richard Eramia has been on quite the winning streak of late. On Monday he was named “Jockey of the Week” on JockeyTalk360.com for winning more races than any other North American jockey last week. 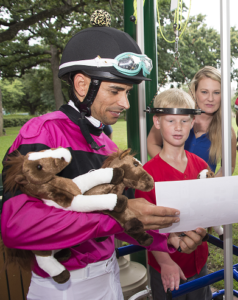 His was chosen for the award based on his 17 wins from 42 starts at the two tracks from June 19 through 25. That is a 40% win rate. During that week, at Louisiana Downs he won three races on Monday, two on Tuesday and five on Wednesday, and at Lone Star Park he won three races Friday, one on Saturday and three on Sunday. He is currently atop the Louisiana Downs Standings by seven wins over Gerardo Mora and second in the Lone Star Park standings by just five wins behind Iram Diego.

Not only is Eramia a top notch rider, but quite the humanitarian as well. On Thursday, his one day off, he joined fellow Lone Star Park jockeys, Iram Diego, Domingo Chacaltana and Daniel Benavides on a heartfelt visit to the Scottish Rite Hospital in Dallas autographing goggles, handing out gifts and passing out smiles to the kids there.

We congratulate Richard Eramia for his accomplishments!

JockeyTalk360.com spotlights the riders across North America and around the world who may be the bravest, toughest and most accomplished of all athletes. The Jockeys’ Guild Jockey of the Week is selected by a vote of representatives of America’s Best Racing, The Daily Racing Form, Equibase, Horse Racing Nation, The Jockeys’ Guild, The Paulick Report, The Thoroughbred Daily News, National Thoroughbred Racing Association, National Turf Writers and Broadcasters, Thoroughbred Racing Associations, and Turf Publicists of America.

Lone Star Park at Grand Prairie, a Class I racetrack operated by Texas Partners LSP and GG LSP. The track offers a 50-day 2017 Thoroughbred Season, which concludes on Sunday, July 30.  Live racing will be held three days a week, Friday at 6:35 p.m., Saturday at 5:00 p.m. and Sundays at 2:35 p.m. Live racing will be held on select Thursdays at 6:35 p.m. (June 15 & July 27). A special twilight program will be held at 5:00 p.m. both on Monday, July 3 and Tuesday, July 4 (Lone Stars & Stripes Fireworks Celebration). For more information on Lone Star Park visit LoneStarPark.com or follow us on Facebook and Twitter.

Global Gaming Solutions, LLC (GGS), is a wholly owned subsidiary of the Chickasaw Nation with a primary business focus of pursuing entertainment, gaming and racing related opportunities in emerging jurisdictions in the United States and overseas as well as acquisition of regional gaming and entertainment assets. GGS LLC is the parent company of GG RP, which owns Remington Park in Oklahoma City, OK and GG LSP, which owns a significant stake in Lone Star Park. GG LSP is the track operator who owns the license to operate Lone Star Park and leases the property from the Grand Prairie Sports Facilities Development Corporation.