The first section, first go of the $392,000-added Open Derby qualifier saw 101 entries make their way into the show pen, vying for a spot in the Open Derby Finals, which will be held on Saturday. 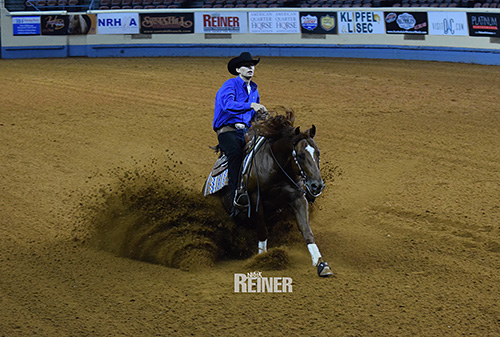 NRHA Professional Brandon Brant and Show Snapn (Hollywoodstinseltown x Whiz N Snap), a 2012 mare owned by Suzanne Cooper and nominated by Couture Reiners, left the arena with a 221 score to lead the L3.

In the L2 division, with a 220, NRHA Professional Sam Schaffhauser aboard Lil Rene Gun (Gunner x Sail Away Rene), owned by James Fanello and nominated by Carlton and Khris Crowe, along with NRHA Professional Sarah Cunningham riding Gotta Get A Diamond (Spooks Gotta Whiz x Brillante Diamantes), owned by Cross C Ranch, tied to lead. Cunningham and her mount are also leading the L1. 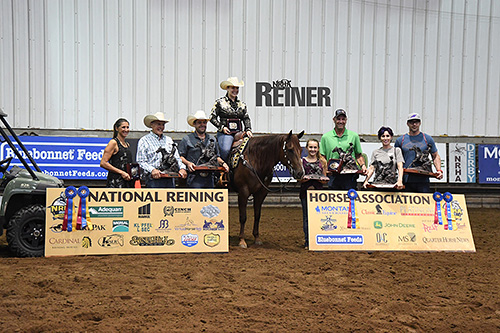 The 7-year-old gelding, by NRHA Four Million Dollar Sire Smart Spook and out of Tinseltown Lil Step, owned by Clay Clausen, is no stranger to the winner’s circle. With NRHA Professional Robin Schoeller and past owner, Elizabeth Himes, in the saddle, the flashy chestnut left his mark in the pen. Prior to coming to OKC, he boasted $59,000 NRHA LTE with Clausen winning over $20,000.

“We purchased ‘Chester’ after the Futurity last year, and I fell in love with him immediately,” said the 15-year-old, fresh off her win at the NRBC where she collected top honors in the Non Pro Challenge with her mount. “My trainer, [NRHA Professional] Patrick Flaherty, brought him home after trying him and, when I first got on him, I knew immediately that he was pretty special. We didn’t have to work on any maneuver in particular – maybe just a little on his circles – yet every time I show him, he makes it all seem so easy. He’s very special!”

The talented rider, who has been riding reiners for the past 5 years, added $10,465 to her earnings today. “This year, my goal is to win the Youth World,” Clausen added. “That’s been my main goal for the past few years. I’m just so fortunate to be able to ride [Chester], and I thank my parents for that. I couldn’t do it without my trainer Patrick Flaherty.”

In a field of 47 entries in the Level 2, Greg Hall and Chics Mainattraction (Conquistador Whiz x Chicstatic) placed second with a 145 score. The duo also placed second in the NRHA Intermediate Non Pro and won the Prime Time Non Pro class. On Monday, the pair won the $2,000-added Novice Horse Non Pro Level 2. Hall says the mare has gotten stronger as the week went on, but it didn’t seem to hinder them in Wednesday’s class. “It was fast,” Hall said. “She was a little strong with me—she was probably better in the novice horse the other day, but we got through it and she did what she was supposed to. She does a bit of everything pretty good.”