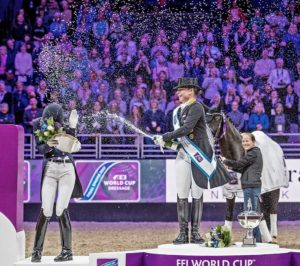 Showdown at the Aachen Soers: The currently most thrilling dressage riders will be meeting up at the World Equestrian Festival, CHIO Aachen (July 14th-23rd).

On the one hand, the undisputed Queen, the giant of the dressage arena: Isabell Werth. She currently holds no less than three places under the top ten in the world ranking lists. She has won everything there is to win on the international dressage circuit. Six Olympic gold medals, seven World Championship titles, 13-time European Champion and 14-time German Champion. On top of that, a further 10 victories in the Deutsche Bank Prize, the Dressage Grand Prix of Aachen, victorious the last time in the year 2008. The 47-year-old German star is the most successful rider of all time. She is the Roger Federer of the equestrian sport. At least.

And now Isabell has a challenger. The young US American, Laura Graves and her “Verdades” have recently put in terrific performances. On Saturday, they won the Grand Prix and the Freestyle at the Dutch CHIO in Rotterdam. Graves additionally led the US American dressage team to victory in the Nations’ Cup. She came second in the FEI World Cup Final in Omaha – beaten only by Werth, albeit with a clear lead. Graves wasn’t exactly happy about having to make do with second place. The US amazon, who will be celebrating her 30th birthday the day before the Deutsche Bank Prize at the CHIO Aachen 2017, is ambitious. The fact that Isabell Werth and her top horse “Weihegold” left her trailing behind on home territory is gnawing away at her.

So, it is time for the next round in Aachen: Werth vs. Graves. Weihegold vs. Verdades. Pure suspense. Graves is “sharp to win” according to the US National Coach, Robert Dover, in other words totally focused on victory. The showdown will take place in Aachen. “I am particularly looking forward to this duel between two extraordinary riders and horses,” stated the Show Director of the CHIO Aachen, Frank Kemperman.

The dressage competitions start on Wednesday, July 19th. Tickets are available online and from the hotline on +49-(0)241-917-1111. There are still a few tickets left for the Deutsche Bank Prize, but both riders will already be competing against each other on Thursday in the Prize of the Tesch Family (first qualifier for the Lambertz Nations’ Cup) and on Saturday in the MEGGLE-Prize (second qualifier for the Lambertz Nations’ Cup).