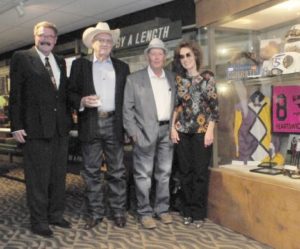 Each year, one owner/breeder, one jockey, one trainer and one horse are inducted into the Hall of Fame

Dutch Masters III has had multiple configurations, however the one constant has been Streelman. His primary partner has been Denny Boer. They have been best friends since the first grade.

The Streelman-Boer combination in Dutch Masters III was the owner and breeder of three champions – Four Forty Blast, Secret Card and Higher Fire.

Boer downsized his racing operation and then teamed up once again with Streelman in Dutch Masters III several years ago. The longtime friends found success with Chazaq, winner of the 2016 Grade 1, $1,070,000 Ed Burke Memorial Futurity.

Trained by Ruidoso Downs Racehorse Hall of Fame member Carl Draper, Heartswideopen won the 2007 Ruidoso Futurity and the All American Futurity. Draper passed on the Rainbow Futurity with the filly. She came back the following year to win the Ruidoso Derby and the Rainbow Derby.