RENO, Nev. (June 21, 2017) – An uncle-nephew team took top honors – and $50,400 – home to the Northwest in the first-ever #12 High Desert Showdown in Reno, Nev. The new addition to Wrangler BFI Week could well become the most popular event of the week for recreational team ropers. 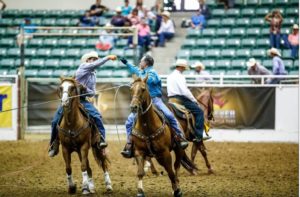 Tim Fuller, 66, a logger from Lewiston, Idaho, and his nephew Casey Fuller, 27, a carpenter from Clarkston, Wash., won a hefty $50,400 together on Wednesday after catching their four steers in 32.05 seconds.

The first-ever edition of the High Desert Showdown drew 139 teams that paid a $2,000 entry fee to rope at 80 percent of the total pot which – thanks to $10,000 generously added by Wrangler – came to $232,400. Ropers were on their game in the short round, with the top five call-backs all roping smooth. Nearly the entire Corkill family made the short round, including world champion heeler Jade Corkill’s mother, father, and sister (they would place fifth and sixth in the roping). In fact, by the time high-teamers Tim and Casey Fuller were called, it would take a run of nine-flat to win that $50,000 first-place check.

After riding in the boxes, the Fullers had to wait quite some time for an errant steer to be roped and cleared out of the arena. It didn’t affect them. Tim left the box as close as humanly possible to dinging the buzzer, then made quick work of his steer while Casey also stayed aggressive to get the flag in 7.06.

Tim, classified as a #5.5, and Casey, who heels as a #7, hadn’t been to Reno for decades and had never roped in the Biggest Little City in the World. Nerves were not a factor, they both said.

“I read an article by Clay O’Brien Cooper one time where he said ‘this is not really important in the scheme of life,’” said Tim. “It’s just another practice run.”

That philosophy worked in his favor. And Tim wasn’t worried about his nephew’s mental game because he said Casey was always a laid-back kid.

“I’ve learned that 90 percent of the time, your first shot is going to be your best shot,” said Casey. “You’re usually making a mistake by not taking it.”

Casey was born into rodeo blood – NFR bulldogger Darrel Sewell and NFR bronc rider Butch Knowles are both uncles. He has only been heeling a handful of years, after growing up heading. In 2008, Casey and NFR header Garrett Rogers had placed in the #12 Shootout in Las Vegas at the World Series Finale (with Fuller heading and Rogers heeling), for $24,000. And in 2010, Casey won a truck in Winnemucca as a header.

He rides a horse he calls Wilson that he bought from Sewell last spring, when he got more serious about his heeling. Meanwhile, Tim’s horse, Rocky, is 22 years old, and still is his main mount at various World Series ropings.

Casey had made the 14-hour drive to Reno the day before with his cousins, Macy Fuller (Mike’s daughter) and Cody Fuller (Tim’s daughter). The High Desert Showdown was even more a family affair for Fullers when Macy placed 10th with Neil Karlson. The clan had also roped at the area World Series events, which they said were “awesome” even though they didn’t win money. Neither Tim nor Casey had ever roped in Reno in the past. Tim and his wife, Cheri, kayaked a little that morning on the Truckee River.

Casey’s dad, Pat, was watching the action live on www.WranglerNetwork.com, and couldn’t have been happier for his brother and son.

“This roping spoke for itself,” Casey said. “I couldn’t have had a more consistent partner – we’ve roped together quite a bit.”

The fan favorite of the day was undoubtedly 80-year-old Dick Yates. The 11-time NFR header had placed ninth the day before in the #11 Reno Million, and took no prisoners during the #12 High Desert Showdown. Yates and J.T. Schalla notched a 7.84 to place fourth – bringing Dick’s earnings at Wrangler BFI Week to $18,250. 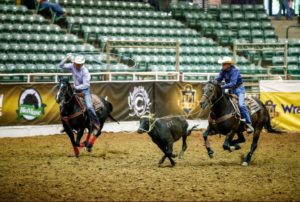 “I’m about wore out,” joked Dick. “But I always win a little here in the #11. To me, this is the best facility you can rope in anywhere. The steers were all good and it was very well run.”

Yates, who was once presented a gold buckle by President Ronald Reagan for his roping skills, is still part of Hitch Rack Performance Horses in Pueblo, Colo., with his son, 21-time NFR qualifier J.D. Yates and grandson, Trey Yates.

Dick and Schalla also won bronzes for riding the best head and heel horses of the roping. Dick bought Max’s Bar Five when he was 7 or 8 – he’s 20 now and was shown by Trey at the AQHA Youth World Show. Schalla also rides a Yates horse. The black gelding, In The Nick Of Shine, belongs to JD and has been shown at various AQHA events.

Complete Results from The High Desert Showdown on June 21: