Parker, CO (June 9, 2017) – As a part of its commitment to recognizing riders who exemplify the ideals of dedication, achievement, and notable contributions within the equestrian community, Triple Crown® Nutrition is pleased to bring the prestigious Triple Crown Excellence Award to this year’s Colorado Horse Park summer competition series.

The company presented its first award of the summer to accomplished breeder and trainer Ann Sparks and rider Carla Salak at the High Prairie II Dressage Show, which took place this month at the Colorado Horse Park in Parker, Colorado.

The Triple Crown Excellence Award, which includes a tri-colored ribbon and a silver engraved tray, was presented to the winning pair of horsewomen after Salak delivered a stunning performance aboard the exceptional bay Hanoverian gelding Leo Leo Hu (Leonberg x Leonora Hu). The duo claimed a first place victory and a whopping 85% score in their four-year-old stallions/gelding class. The superstar mount, a favorite of Sparks for his willing demeanor and exceptional mind, is a product of her own elite breeding operation, Horses Unlimited.

With a superior physicality and brain to match, it’s no surprise that Leo Leo Hu has won over the favor and hearts of both Sparks and Salak. Sparks described the dashing mount as the perfect gentleman amongst her stable of sport horses, saying, “Leo has such an amazing mind. He is just so willing. He can do the FEI, he can sit, he can move. He is an Adult Amateur’s dream.”

When asked what she liked the best about the special mount, Salak admitted it was difficult for her to choose just one thing. “I just love the temperament on him. You always know he’s going to give you his all 100% of the time. He’s always right there with you, asking what you want, and how you want it. Riding him is like riding on a cloud.”

Both Sparks and Salak are a perfect representation of how commitment to excellence in training and equine development serves as a key ingredient in producing exceptional horses. Triple Crown was pleased to honor the pair for their superior work with Leo Leo Hu at the Colorado competition. The company looks forward to presenting the award to deserving equestrians throughout the remainder of the Colorado summer show series, which will continue through August 6.

Founded in 1989 and headquartered in Wayzata, Minnesota, Triple Crown’s own commitment to excellence is apparent in its feeds. Triple Crown was the first company to add prebiotics, probiotics, and organic minerals to horse feed. Today, the company continues to deliver the very best in equine nutrition with its revolutionary formulations and premium quality ingredients. Triple Crown is the official feed sponsor of the U.S. Dressage Team, the Land Rover U.S. Eventing Team, and the Hermes U.S. Show Jumping Team, and is a proud sponsor of this year’s Dressage in the Rockies and Summer in Rockies show series at the Colorado Horse Park. 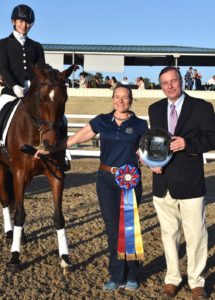