Competitive Rankings Continue for All Championship Finals
race continues as horses and riders from around the nation compete for points to qualify for the 2017 Washington International Horse Show (WIHS) Equitation and Children’s and Adult Hunter and Jumper Championships. The best of the best will earn the opportunity to show at the nation’s top indoor final, which takes place October 24-29, 2017, at Verizon Center in Washington, D.C.

As of June 2, 2017, Shannondale Gino and Hailey Berger of Parkland, Fla., maintain their lead in the Children’s Jumper Division, coming into June with 2,714 points. Cassandra Dreams and Mia Albelo of Coconut Grove, Fla., moved into second place with 2,676 points. Top Price and Charlotte Novy of Wilmette, Ill., stand third with 2,511 points. 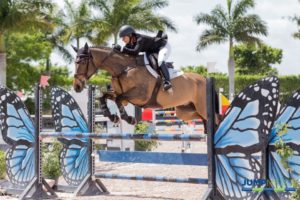 “The WIHS Equitation Finals and Hunter and Jumper Championships give riders from around the country excellent goals to set for themselves each season,” said WIHS President Vicki Lowell. “The dedication and determination it takes to achieve those goals is wonderful to see. I wish all of the riders the best of luck as they continue to earn points throughout the remainder of the qualifying period, and we look forward to another great event in October!” 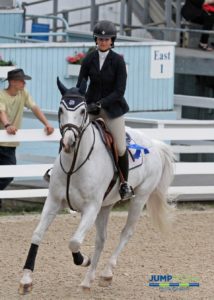 Lindsey Tomeu and Bonapart lead the WIHS Adult Jumper Championship standings. Photo by Jump Media
Don’t miss the chance to compete at the nation’s most unique and time-honored metropolitan event. The qualifying period runs from shows starting on or after Sept. 1, 2016, through shows starting on or before Aug. 31, 2017.

WIHS looks forward to hosting the best horses and riders from around the country in 2017 and encourages all riders to continue their drive to qualify. Riders must be active WIHS members in order for points to count towards the Finals.

As the season continues, WIHS congratulates all of the top competitors in the WIHS standings as of June 2, 2017:

In the Children’s Hunter Championship, Ufonia P and Cassie Warmkessel of Phoenix, Md., are the leaders with 1,242 points.Rocksino and Anna Tokich of Chardon, Ohio, jumped to second place with 1,200 points.Escalido and Annie La Russa of Mountain Brook, Ala., sit third with 926 points.

Uptown and Victoria Clarke of Chevy Chase, Md., hold a steady lead in the Adult Hunter Championship standings with 1,976 points.Glyndon and Patricia Schindler of Reisterstown, Md., also maintain the second position with 1,710 points.XOXO and Jef Lauwers of Magnolia, Texas, moved up to third place this month with 1,370 points.

Emma Kurtz of Hudson, Ohio, has taken over the lead in the WIHS Equitation East Coast standings with 4,672 points. Taylor St. Jacques of Glen Allen, Va., is second with 4,000 points, and Coco Fath of Fairfield, Conn., stands third with 3,000 points.

For more information or to sign up to earn points for the WIHS Championship Finals, visit www.wihs.org/membership.

For a complete list of current rankings, visit http://www.wihs.org/wihs-rankings/

← The Colorado Horse Park Kicks Off Summer With CDI 3* and CCI 1*/2* Alongside Heart of the Horse Gala
“Free the Donkeys!” Campaign will Ease the Suffering of Working Equines this Summer →