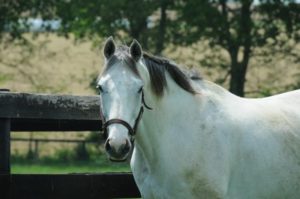 GEORGETOWN, KY – MAY 30, 2017 –  Multiple-graded-stakes winner Diamond Stripes was euthanized May 29 at Old Friends, the Thoroughbred Retirement Farm in Georgetown, KY.

According to Old Friends veterinarian Dr. Byran Waldridge, the cause of death for the The 10-year-old gelding was complications of treatment for progressive ethmoidal hematoma. A benign but highly locally invasive sinus cancer.

Bred in Florida by Mr. and Mrs. Samuel Rogers Jr, for their Four Roses Thoroughbreds, Diamond Stripes won six of his 16 starts, including three black-type victories. His earnings total $1,478,014.

Diamond Stripes (Notebook – Romantic Sunner, On to Glory) broke his maiden in 2006 at Belmont Park in his first start. His subsequent four-race win streak included his first stakes win, which came in the GR3 Pegasus Stakes at the Meadowlands. The following year he captured the GR2 Meadowlands Cup Handicap.

His greatest victory, however, came in 2008 in Dubai where he triumphed in the $1 million Godolphin Mile (UAE-II) under jockey Edgar Prado.

But by 2010 the gray gelding had begun a drop down the ranks, eventually starting in claiming races at New Mexico’s Sunland Park. Old Friends President Michael Blowen then contacted trainer Chris Hartman about retiring the horse.

“We were so happy to have been able to provide Diamond Stripes with a  worthy retirement these last years,” said Blowen. “He was a kind horse with a strong spirit and he will be missed by many of his friends and fans.”