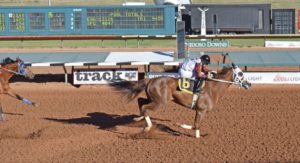 RUIDOSO DOWNS, New Mexico (May 27, 2017) — Juan Medina’s classy fastest-qualifier Eagle Jazz and his trainer Judd Kearl stepped up during the second of two days of trials to the Grade 1, $1-million (est.) Ruidoso Futurity on Saturday afternoon at Ruidoso Downs.

Eagle Jazz came into the Ruidoso Futurity trials with futurity experience and that class showed when he ran in the 13th and final trial, the deepest trial of the day. He was the was the horse to beat within the first 100 yards. He went to the lead and then drew away to an easy two-length win in :17.874 for 350 yards under jockey Rodrigo Sigala Vallejo.

The gelded son of One Dashing Eagle earned his 7-10 favoritism by finishing a head-bobbing second in the $1-million Remington Park Oklahoma-bred Futurity on April 22. He then came to Ruidoso Downs and joined the Kearl barn.

“He’s a half-brother brother to (2016 Remington Park Oklahoma-bred Futurity) Teller Baja and just like her,” said Kearl. “He sleeps 23 hours a day and you wouldn’t know he’s in the barn. He’s also damn sound.”

Bobby Cox’s homebred Aeropodium, a son of One Famous Eagle, came through with third-fastest qualifying time. The colt was second in a Sam Houston Race Park maiden race in his only other start.

“John Buchanan broke him and we just gave him an out in Houston,” said Kearl. “He’s moving forward with each race.”

Terry and Irene Stennett’s U R My Queen gained the day’s second-fastest qualifying time after battling to a neck win over fifth-fastest qualifier Brown Test Seis.

U R My Queen, a $57,000 Ruidoso Select Yearling Sale purchase, showed her promise in her training race. The Walk Thru Fire daughter raced to the quickest time on the third day of training races at Ruidoso Downs in early May.

“She just doesn’t do anything wrong and is a professional,” said trainer Trey Wood.

Pete Scarmardo’s homebred This Is A Deal Too raced in the first trial and put a :17.951 mark up for everyone to shoot at. “I’m nervous,” said trainer Jackie Riddle before then time was surpassed and ended up as the afternoon’s third-fastest mark. “I was nervous when I was a groom and had $2,500 claiming horses.”

This Is A Deal Too qualified for the Sam Houston Futurity, but lost all chance after a bumpy start.

“We thought today he would do well, but anything can happen in a horse race,” said Riddle.

A son of Dealagame, This Is A Deal Too is produced by Lady Lilia. She also produced this year’s Sam Houston Futurity winner This Is An Eagle, sired by One Famous Eagle.