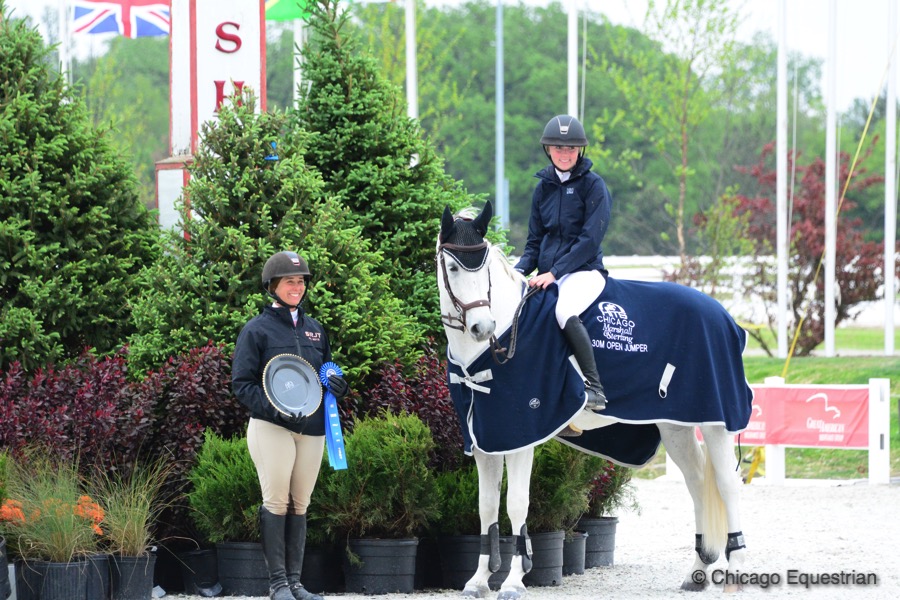 Lisa Goldman and Moritz W accept the award for their win in the $10,000 1.30m Marshall & Sterling Jumper Classic (Hannah Bilton aboard in photo).

Crete, IL – May 19, 2017 – Faster and faster they went in an exciting $10,000 1.30m Marshall & Sterling Jumper Class at the new HITS Balmoral Park. A spring cold front didn’t stop Chicago riders from bundling up and playing while spectators had the perfect view from the climate-controlled grandstand. The top six horses showed the crowd a real horse race over the Oscar Soberon designed track in a fight for the winner’s circle.

Hometown favorite Lisa Goldman, Hawthorn Woods, Illinois, set the pace on her Diego VD Endepoel, jumping a clean round and adding her usual galloping jump off style for a time to beat of 35.760 seconds. That didn’t last long as Goldman’s student, Hannah Bilton, 18, of Buffalo Grove, Illinois, beat that time on her Chasinta, shaving off a second with 34.450. 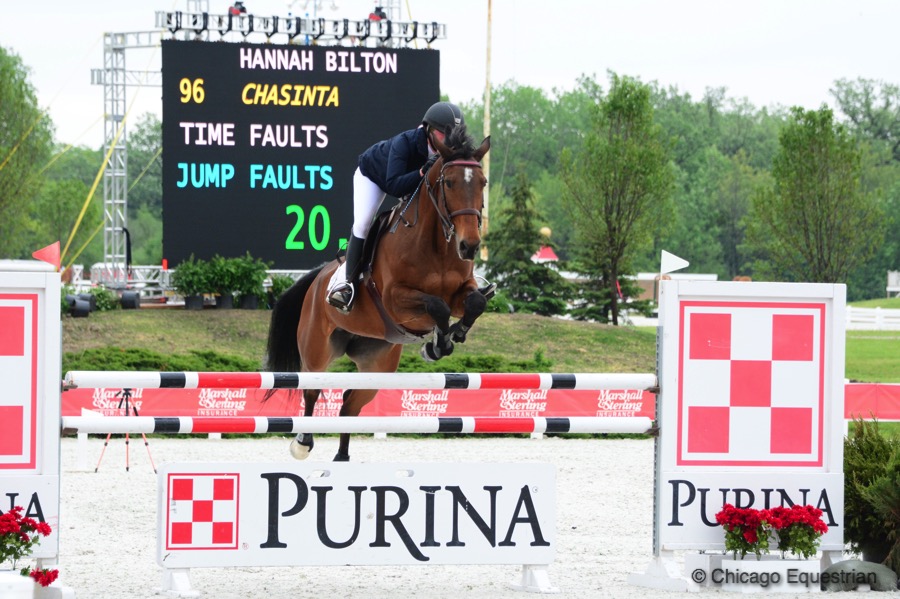 The horse race continued as another Red Coat Farm/Lisa Goldman rider, Adeline Rohrbach, was not about to be beat and zipped through the timers on her Valladam, beating Goldman but not as fast as Bilton, for a time of 35.380. A few horses later it was Tiffany Hammack who took over the lead on Wayfarer Farm’s Lona C, setting a new time to catch of 34.110.  Then came Splendor, ridden by Caelinn Leahy, Maple Park, Illinois, who ended up neck and neck with Hammack in a tie for the lead. 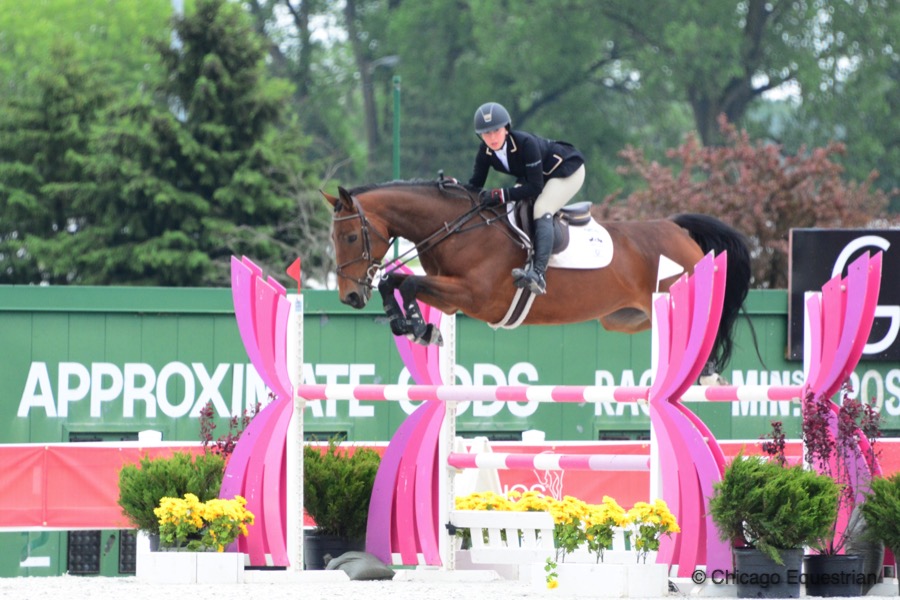 Adeline Rohrback and Valladam gave Goldman a run for the money. 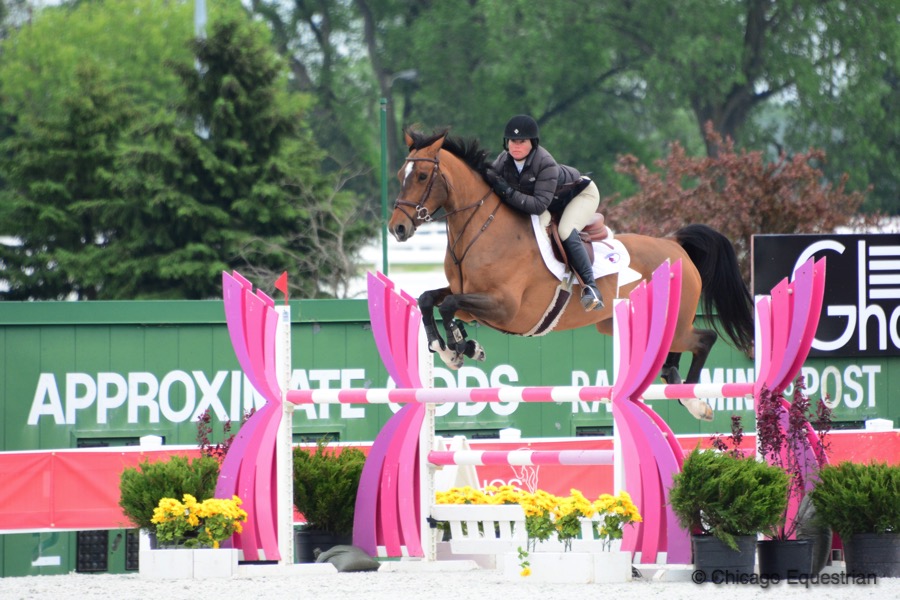 Tiffany Hammack and Lona C tied for second in a race for the winner’s circle.

Goldman was not about to be beat by the youngsters though, shaving two seconds off the fastest time set by Leahy and Hammack, earning the winner’s circle photo on Sarah Scarnechia’s Moritz W and a clock stopping 32.100 seconds. 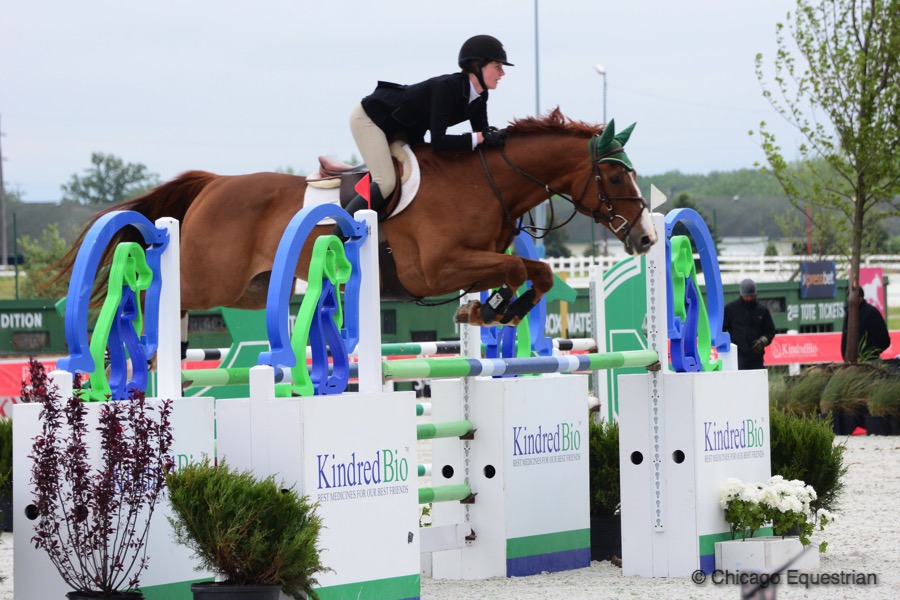 Caelinn Leahy and Splendor ended in a dead heat for second.

Red Coat rider and last year’s leading rider in the Marshall & Sterling Series, Kyle Perkovich, had a time that would have put him in second with his new horse, Tresor Du Perron, but pulled a rail at the Purina vertical putting him in 7th. Young rider Kesley Taylor and Fernleigh also put in time that would have landed her the third place spot but ended up eighth due to her four faults from a rail.

Goldman loved that her team of riders were all so competitive. Many of her riders have more than one horse they compete on, which gives them extra mileage in the show ring. The Marshall & Sterling series allows riders to move up the ranks toward the grand prix level.

“They all rode great!” smiled Goldman. “Hannah [Bilton] was a fast double clear, Addie [Rohrbach] moved up to the 1.30m in her second show ever with her new mare and was double clear, this is Kyle’s [Perkovich] first show ever with his new horse and he was really competitive. It’s always exciting competing against my own students, especially when they go faster than me! We have a really strong group of horses and riders right now and it’s really rewarding watching them move up.”

“I love the new 1.30 Grand Prix series here at Balmoral!” added Leahy. “There’s so much room to really get going on the horses in the jump off. For example, the jump off today had several long gallop stretches and in order to be in the top, you really had to be cruising around the ring. They [HITS] did a great job of keeping really cool elements of the old racetrack here in the Grand Prix ring, like the finish line and scoreboard! It’s cool because I know a jockey who used to race here and he might come to one of the shows.”

“Today was such a fun day for me!” Leahy continued. “Even though the weather was pretty rough, the footing was great and the jumps looked beautiful. I was especially happy with my horse today. He’s newer to me and I had a really great time on him. He’s one of those special horses that just makes you smile.”

Competition at HITS Balmoral Park continues Saturday in the Grand Prix ring with the $35,000 HITS Grand Prix and the $2,500 GhoDho U25 Jumpers.

For complete results or a schedule of events, visit www.hitsshows.com.

About HITS Balmoral Park
HITS purchased the historic Balmoral Park Race Track  in 2016 after harness racing ended in December of 2015. The property has a long history dating back to 1925, hosting famous race horses such as triple crown winner, Whirlaway, and the country’s top jockeys such as Bill Shoemaker, Laffit Pincay, Jr, and Julie Krone. In 1991, the track became Chicago’s premiere harness racing track.

HITS has renovated the venue to add 9 show rings and adjacent warm-up rings with all weather footing and completely updated 23 barns with brand new stalls and rubber mats, while keeping the history of the park alive. The climate controlled grandstand offers space for spectators, vendors, VIP and corporate seating.