East Dorset, Vermont – The Vermont Summer Festival will return to Harold Beebe Farm in East Dorset, VT, for six consecutive weeks of competitive and spectator-friendly hunter, jumper, and equitation events from July 4 through August 13, 2017.
In 2016, the Vermont Summer Festival experienced one of the most popular seasons in its 24-year history, and expects similar success in 2017. Entries will be processed in the order in which they are received, and exhibitors are encouraged to submit entries before the closing date to ensure acceptance. The prize list for the 2017 Vermont Summer Festival is available online here, and entries for all six weeks of competition must be postmarked by June 6 and received by June 9. Entries may be mailed or filled out online and submitted electronically through the services provided by Equestrian Connect. 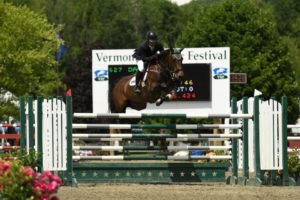 Jimmy Torano of Wellington, FL, pictured riding Day Dream, topped the $10,000 Sir Ruly, Inc.,
Open Jumper Awards at the 2016 Vermont Summer Festival.
Photo by Andrew Ryback Photography
“We are very proud of the growing popularity at the Vermont Summer Festival,” said Ruth Lacey, Marketing Director of the Vermont Summer Festival. “It is very exciting to see returning exhibitors as well as new faces settle in for a summer in Southern Vermont. We do our best to offer competitive events, and to also encourage our riders and their families to enjoy their time in Vermont.”
The Vermont Summer Festival proudly offers competition that spans all levels from leadline and short-stirrup classes to weekly grand prix offerings. Highlighting top jumper competition in 2017, the first five Saturdays will feature a $30,000 Grand Prix. The $50,000 Vermont Summer Celebration Grand Prix will close the season on a high note during the sixth and final week of competition on Saturday, August 12. Jumper competitors will also enjoy the weekly $10,000 Open Welcome Stake, presented by Manchester Designer Outlets, each Thursday. All classes in the grand prix ring will be built by world-renowned course designers, including Ireland’s Alan Wade, who was the course designer at the 2017 World Cup Final in Omaha, NE, and has been tapped to design the tracks at the 2018 FEI World Equestrian Games in Tryon, NC.
While jumper competition is fierce at the Vermont Summer Festival, the event is also known for its ‘Equitation Tuesday’ offerings. Over the last several years, the Vermont Summer Festival has become a hot spot to qualify for year-end equitation finals thanks to the introduction of ‘Equitation Tuesdays’. On Tuesday of each week, the Vermont Summer Festival hosts some of the country’s top equitation riders under the direction of their well-respected trainers, including the likes of North Run’s Missy Clark, Frank Madden of Old Salem Farm, and Amy Momrow and Monty Kelly of Stepping Stone Farm, to name but a few.
“What we really love about the Vermont Summer Festival is that we can bring every rider in our barn to compete,” said Momrow, who trains alongside Kelly at Stepping Stone Farm based in Albany, NY. “We have a five-year-old walk-trot rider all the way up to our equitation riders. Personally, I look forward to competing in the grand prix and hunter derbies, but a favorite among all our riders is ‘Equitation Tuesdays’.”
For hunter competitors, the $5,000 3’3” NEHJA Hunter Derby qualifier will return each Thursday for the first five weeks, culminating with a $15,000 offering on Thursday, August 10. In addition, competition during week three of the Vermont Summer Festival will be highlighted by World Championship Hunter Rider (WCHR) qualifying opportunities for hunter competitors hoping to make an appearance at the WCHR Finals during the Capital Challenge Horse Show, running September 29 through October 8 in Upper Marlboro, MD.
Special awards on offer at the 2017 Vermont Summer Festival include the $10,000 Sir Ruly, Inc., Open Jumper Awards. In 2016, Jimmy Torano of Wellington, FL, posted five weeks of top results to top the standings, named in honor of his late uncle Raul “Ruly” Torano. Initiated by Raul Torano, the Sir Ruly, Inc. Open Jumper Awards now serve as a legacy of his generosity and support for the annual Vermont Summer Festival, a horse show he personally loved to attend, and the Manchester community in general. Riders accumulate points by placing in any of the three open jumper classes, with $10,000 in bonus money awarded to the top three finishers at the end of the six-week circuit.
The Vermont Summer Festival is New England’s largest hunter/jumper competition and the richest sporting event based on purse in the state of Vermont offering more than $750,000 in prize money. The event is also a proud member of the Show Jumping Hall of Fame, the Marshall & Sterling League, and the North American League (NAL).
For more information on the Vermont Summer Festival, please e-mail or visit www.vt-summerfestival.com