Lexington, Ky. – May 12, 2017 – Competing in her first show of the year, Ohio State University student Sara Santisi of Dublin, Ohio was on form, winning the Ariat National Adult Medal Friday morning at the Kentucky Spring Horse Show. Exhibitors were asked to navigate a course of eight fences designed by Bobby Murphy in the Claiborne Ring for the first round, and the top four to place returned for additional testing.

Returning in the reverse order of preference, riders were instructed to enter the ring at a walk, canter directly to fence two, halt, canter to fence eight, trot fence one, and exit the ring at a walk. Santisi was aboard her own Swedish Warmblood, Jackson, and scored an 83 in round one to came into the test in second place behind Emily Kowalchik who had an 88 in the first round.

The test played to Jackson’s strengths, and Santisi took over the lead to win the class. The duo executed a beautiful, consistent round, where Jackson immediately picked up the left lead after the halt.

Santisi purchased Jackson, a 12-year-old gelding, five years ago and the duo showed together in the junior hunters in 2016 before she aged out. Having also competed in the jumpers for a year, Santisi enjoys watching the professional jumper classes while at Kentucky Horse Park. Lyriss Jaeger of Georgetown, Kentucky rose from a score of 78 in round one to claim second place aboard her own Catanova while Lindsey Tomeu piloted Red Drum, owned by Elm Creek Holdings, LLC, to the third place honors.

On Saturday, the hunters will take center stage in the Stonelea Ring where the Grand Champion Amateur-Owner Hunter will be named. The Kentucky Spring Horse Show will come to a close on Sunday after the $15,000 USHJA International Hunter Derby and the $5,000 World Equestrian Center/Kentucky Horse Shows USHJA National Hunter Derby. 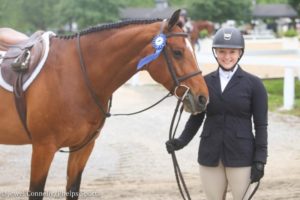