Lexington, KY – May 12, 2017 – Sam Walker sped to the top of the High Junior and Amateur Owner Jumper class on Friday morning at the Kentucky Horse Park during the Kentucky Spring Horse Show. Walker was aboard Missy Clark’s Twan and completed the speed course in the fastest clear time of 61.198 seconds. Addison Gierkink rode Wisconsin III to a second place finish one second slower in a clear time of 62.484 seconds. and Noel Fauntleroy took home the third and fourth place ribbons with Arbitrage and Mae, respectively.
Thirty-four entries competed in the Rolex Arena over a course that was designed by Maria Azevedo and was very similar to the track that was featured in the first round of the $35,000 Hagyard Lexington Classic CSI3* from Thursday evening.

Walker, a Canadian junior rider from Ontario, completed the speed course on the 16-year-old bay gelding who is owned by Missy Clark of North Run Farm. Walker and Twan have been competing together since March and had multiple top place finishes in the Junior Jumper and 1.30m divisions at the Winter Equestrian Festival.

No stranger to the show ring, Walker was raised on his families Forest Hill Farm and began riding at the age of four. Once his parents placed him on top of a horse, he has never looked back and has excelled at hunter, equation and jumpers. 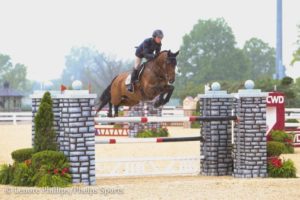