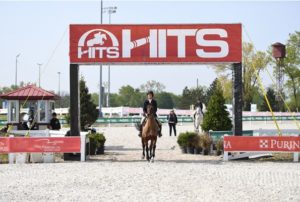 A Venue That Focuses on Horses’ Well-Being
Over the last twenty-four hours, the first horses since December 2015 have arrived on the Balmoral Park site, albeit for a very different purpose:  Show Jumping, rather than Pacers and Trotters. It is now time to show, once again, and today will bring the first Hunter/Jumper competitions to be held at the newest HITS venue.

Since last year, HITS has completed a multi-million dollar renovation at Balmoral Park with a “horse-first” attitude – priority one was to update the rings, footing, grounds and stabling the right way. Already, a great reputation is starting to build on what matters: a horse park that focuses on the horses’ well-being.
“Really thrilled about the footing! We schooled everybody today in the huge rings with new jumps, which look great! Nice that stalls have rubber floor mats which is appreciated.”
-Kathleen Caya, Integrity Farms

“Barns and stabling are beautiful. The footing in the arenas is unbelievable. Just love it.”
-Mary Goldman, Red Coat Farm

“I was reluctant to go to a new place when it had rained all during the night before, doubting the footing. However, the footing is stellar and remained separated, so the show will be well attended.”
-Donald Cheska, Twin Lakes Farm
“Everybody I have spoken with is thrilled with the re-opening of Balmoral Park. For me, being back here is very Déjà vu since my Grandpa, Woody Stephens, raced flats here, back in the day. There’s even a part of the track called ‘Half Mile Barn’ where he and I used to walk with the horses when I was 8-years-old. The Stabling, is absolutely amazing, it never looked so good. I’ll definitely be coming here for as many shows as I can.”–