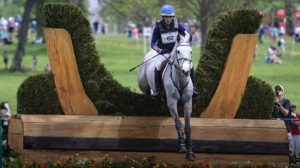 Lexington, Ky. – The 2017 Rolex Kentucky Three-Day Event presented by Land Rover (RK3DE) took place April 26-29 at the Kentucky Horse Park in Lexington, Ky. As America’s only top CCI4* event and the Rolex/USEF CCI4* Eventing National Championship, the RK3DE saw a crowd of nearly 80,700 spectators gather to show their support for some of the world’s top horses.

The Sunday broadcast of RK3DE was the second highest-rated sports program across all reported networks in the broadcast window, behind only NASCAR, which aired on FOX.