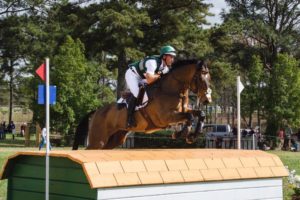 Lexington, KY (April 26, 2017) – Internationally successful eventer Clark Montgomery, originally from Texas, has lived and competed against the best in the sport throughout the United States and Europe. He rose steadily through the ranks, earning first place in competitions such as the 2016 Nations Cup CICO3* in Virginia and the 2015 Blenheim CCI3* in the United Kingdom. He eventually achieved his goal of being named to the United States Eventing Team for the Olympic Games in Rio de Janeiro, Brazil, this past summer.

Now, Montgomery and his Olympic mount, Loughan Glen (an Irish Sport Horse stallion by Limerick), are saddling up to compete at the Rolex Kentucky Three-Day Event at the Kentucky Horse Park in Lexington on April 27-30, 2017. Montgomery and ‘Glen’ are currently based out of Lexington, Kentucky, and are feeling confident about the famed eventing competition that’s about to take place in their backyard.

“At 14 years old this year, Glen is feeling primed and ready to rock this thing,” says Montgomery. The stallion was purchased nearly a decade ago by Montgomery, his wife Jessica Montgomery, Holly and Bill Becker, and Kathryn Kraft. “Glen is a really good competitor – he understands all three phases and knows what he’s supposed to do,” explains Montgomery. “He loves coming to these big competitions. He gets here and seems to understand what the question is for him for the weekend. That’s my favorite thing about him, and I think that’s what makes him a top horse.

It hasn’t all been smooth sailing for Glen, Montgomery, and their team, though – Montgomery made the decision to retire the stallion during the 2016 Olympics when an old injury resurfaced, turning his dreams of the medal podium into a trip to the surgeon’s to remove a bone chip in the horse’s knee.

Less than a year later, Montgomery and Glen are back on top of their game, showing strong performances in all phases. A secret ingredient on Glen’s road to recovery, Montgomery reveals, has been the TheraPlate – the Official Therapy Plate of the US Equestrian.

TheraPlate Revolution Therapy Platforms is a company that manufactures a recovery and fitness platform that is used by top horses across the disciplines. By simply standing on the TheraPlate, horses can increase their circulation, reduce pain, build muscle, warm up, and cool down, amongst other benefits.

“I discovered the TheraPlate this winter while we were in Ocala, Florida,” Montgomery recalls. “I decided to try it, and I absolutely fell in love with it. I use it every single day for Glen and for the other horses in my barn. I have never used a type of therapy where I felt such an immediate difference in the horse as I did with the TheraPlate. I really feel like it loosened him up, and he feels great in his body.”

Ever since trying it for the first time, Glen has used the TheraPlate regularly. “I always use it after I ride. Throughout Glen’s spring season and winter season this year, I’ve had him on it every afternoon before we put him to bed. It really seems to help his body not get sore and stay nice and loose. It’s just kept his body in really good condition,” Montgomery explains. “Since he had the chip taken out of his knee, the TheraPlate has really helped me – he hasn’t taken a lame step since using it.”

As to whether Montgomery feels that he and his longtime partner are ready to bring their A-game to Rolex, the rider’s answer is sure. “Absolutely. The TheraPlate has helped me get him ready for this.”

Now, their focus is on the competition at hand. “I really enjoy all three phases – I’m one of the few that actually likes dressage,” Montgomery smiles. “Cross Country will probably be the most difficult phase for us. It’s the thing we definitely have to work on most. But he’s been competing super well already this spring and he’s really fit, so hopefully everything goes well.”

TheraPlate wishes the best of luck to Montgomery – who is now an official TheraPlate Brand Ambassador – as he and Glen take on the competition this weekend. To find ride times and competition information for the Rolex Kentucky Three-Day Event, visit http://rk3de.org/. To learn more about the TheraPlate and why top riders like Clark Montgomery rely on the product, visit http://www.theraplate.com/.