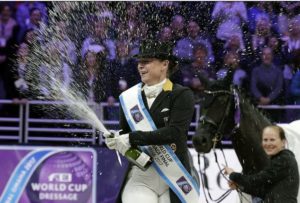 Jubilation on the podium as Isabell Werth celebrates her win watched by her groom Steffi Weigard and her beautiful mare Weihegold at the FEI World Cup™ Dressage Final 2017 in Omaha (USA). (Jim Hollander/FEI)

When she’s got her game face on, you ain’t messin’ with this lady. But this evening the sometimes seriously scary world no. 1, Germany’s Isabell Werth, really let her hair down during the prizegiving ceremony after clinching her third FEI World Cup™ Dressage title in Omaha (USA). Drenching American runner-up Laura Graves (29) and third-placed British star Carl Hester (49) in a fountain of champagne she celebrated big-time on the podium.

“It’s special to win again after ten years, to come back with a different kind of horse and after a really great season. I’m very happy and I’m also thankful, because I know what it’s like to be downstairs, and I’m really happy and grateful to be upstairs again!”

Werth has indeed experienced all the highs and lows that accompany a long and extraordinarily successful career.

The undisputed doyenne of the sport, and the most decorated equestrian athlete of all time, was last into the arena and chasing Graves’ target score of 85.307 with Verdades. The American created a frenzy of excitement when finishing her test with a spine-tingling extended trot – “I wanted to add a little surprise today and I think it paid off, and the crowd loved it!” she said after raising the roof of the Centurylink Centre.

But Werth and the mare with which she claimed Olympic team gold and individual silver at the Rio Olympics just cruised through a fabulous Freestyle full of grace, poise and elegance for the winning mark of 90.704. Hester too was happy with third place. “I think he gave his maximum so I can’t be disappointed when he did his absolute best” he said of his horse Nip Tuck who scored 83.757.