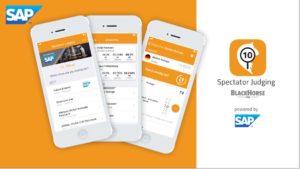 SAP, which has now become the Official Analytics Sponsor of the FEI World Cup™ Dressage series, will be using its long experience of reinventing fan experiences to work with the FEI on engagement opportunities that will bring equestrian and dressage audiences closer to the action and their passion.

An immediate key benefit of this new partnership is the dressage fan’s ultimate free app – Spectator Judging – which will be used at the FEI World Cup™ Dressage Final today in Omaha (NE).

The app, available now for free download from iTunes and Google Play, allows audiences to get in the judges’ seats during competition and create real-time scores and rankings, which then sit side-by-side with official results on the arena scoreboards.

Users have the opportunity to score each movement throughout individual dressage tests or simply set the score at the end, with a raft of additional functions including comparing scores with fellow fans, and access to athlete and horse statistics.

Spectators using the app in this afternoon’s Freestyle to Music will go into a raffle to win a photo opportunity with the FEI World Cup™ Dressage Final champion in Omaha.

“Spectator Judging is the ultimate engagement app for dressage fans,” FEI Secretary General Sabrina Ibáñez said. “Our fans have this fantastic opportunity to ‘virtually’ join the judges while watching the world’s top dressage athletes compete at the FEI World Cup Dressage Final here in Omaha. The app strikes that perfect balance – live game experience with immediate acknowledgement and reward for our dressage fans, and working with SAP we’re now looking forward to creating more engagement opportunities like this.”

“The FEI World Cup Dressage Final is a major landmark in the equestrian calendar and we’re thrilled to be a part of this,” Head of Global Sponsorships at SAP Bjoern Ganzhorn said. “Putting the audience in the centre of the action by simplifying and enriching the sports experience powered by SAP is a key part of our sports strategy, and Spectator Judging provides a whole new way of interacting with fans of equestrian sport.”

The app, which runs on SAP Cloud Technology, is the result of a collaboration between SAP and software development company Black Horse One, an official SAP Partner.

After a successful introductory phase at key qualifiers in the FEI World Cup™ Dressage series leading to the Final, the app is now live and ready to be used by fans in Omaha.

The concept of engaging fans to score equestrian competitions in real-time was first developed as a co-innovation project between SAP and the international horse show CHIO Aachen (GER) in 2013, and thanks to encouraging feedback from fans, athletes and officials has now become a regular fixture at this event.