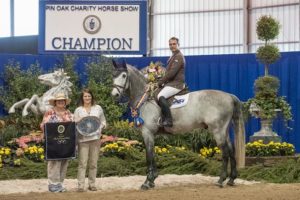 Christian Heineking made it two-for-two when he won the $25,000 Pin Oak Grand Prix today at the Pin Oak Charity Horse Show I, sponsored by PJP Farm. Heineking also claimed the blue ribbon last night at the Great Southwest Equestrian Center in Katy, Texas, in the $10,000 Welcome. He topped both classes riding NKH Calango.

Heineking, 37, wasn’t able to stay to celebrate, however, as was packed and ready to travel home to October Hill Farm Sporthorses in Hudson Oaks, Texas, for a few days of rest before making the journey to Omaha for next week’s FEI World Cup Show Jumping Final.

“I’m very happy with the horses, and both jumped double clean, which was great,” he said. “I had the same ride (as last night). The plan for the gray (Calango) was to canter a little more if we get to the jump-off, and that worked out well. I’m very happy the horses jumped so well, and I feel prepared.”

Tony Font and NLF Favorite kept Heineking from a top-two sweep by slipping into second place with a quick jump-off, and Kristin Hardin placed fourth and fifth with Bert and Firestone S, respectively.

Christian’s wife, Erin Davis-Heineking, added to the Grand Prix ribbon collection with eighth aboard Ramona De Flobecq. The entire family travels and shows together, including 2-year-old Ella, whose 30-year-old leadline pony Quanah also joins the FEI horses on the road. 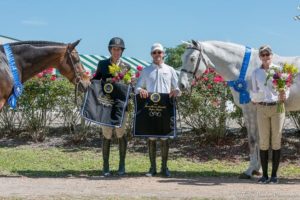 Peter Pletcher carried armloads of awards back to the PJP Farms tackroom today after winning performances in multiple hunter rings at Pin Oak.

Highlights included his sweep of the Green Hunter Incentive Program classes. He guided Shadyside Farm, Inc.’s Luminous
to victory in the USHJA Green Incentive
and the top check of $1,584, and he picked up $1,133 for the win aboard Nanette Herbert’s Soul Mate in the Texas Super Stake.

“He was awesome here. We took him to Florida, and he got great ribbons and was reserve champion the last week we showed him there,” said Pletcher. “He’s just excellent, has a great brain, and he does the 3’3” Amateurs with his owner, Kate Gibson.”

“We bought him last year, and he just turned 6,” said Peter of the gray warmlbood. “Sue Copeland leases him, and she’s working her way up to the Adult Amateurs. We’re shooting for her to start here next week. He’s a great horse.”

Jennifer Alfano, of SBS Farms, continued her success at Pin Oak today. In addition to earning the 3’3″ Performance Working Hunter championship with Jersey Boy, she guided Kathy Chiaf’s Kindred to second and third places in the USHJA Green Incentive and the Texas Super Stake, respectively, for total prize money of $1,729.

“This is Kindred’s first show, and he’s amazing,” said Alfano. “He was very green to start but got better and better in each class, and by the last class (which counted for the Incentive), he scored an 84. He’s a very exciting young horse.”

Cash is King of 3’9″ Green Hunters 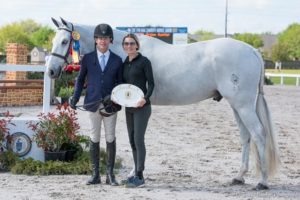 Even after a long break from the show ring it didn’t take Cash long to return to form. Natalie Bass’ striking gray jumped to three blue ribbons on the way to the 3’9″ Green Hunter championship with rider Peter Pletcher.

“There aren’t many horses that can come out of the stall and do this,” said Pletcher. “He was on a break and doing light hacks, and two days before the show I jumped him. He’s one of my best derby horses, and there was no reason to let all this derby money here at Pin Oak slip through our hands!”

Bass, who also competes in the amateur sections, appreciates Cash for his wonderful demeanor. “He’s so consistent. My 14-year-old daughter Lila can jump the 2’6, I can jump the 3’3” and Peter can jump the 4’6” on him. He’s just an amazing horse,” she said.

“Audry was one of the victims of that horrible fire in the Texas Panhandle,” said Pletcher. “She lost more than 700 head of livestock and three homes on her place. It was really nice to win this for her during this horrible time.

“She’s hoping to make it out to watch the Derby,” he added. “She was out there for two weeks helping her family, and it was such a tragic event. But the horse has been great and coming through for her. It’s a light of hope.”

Antonini purchased the flashy chestnut from Evan Coluccio last November after admiring the way he jumps and his beatuiful conformation. Coluccio showed him this winter before Shepherd took over the ride the last week of Gulfport. This was the pair’s second show together.

The New Orleans-based Antonini has been traveling to Pin Oak since the 1970s. “I’ve not been here every single year but, it’s a great horse show, and they really care about the exhibitors and make us feel welcome. It’s a lot of fun,” she said.

“It’s amazing to have a champion here, especially in the hunter ring,” she added. “I’ve been doing the jumpers my whole life, so I’ve just made the transition to the hunters and it’s been great.”