The 72nd show is underway! 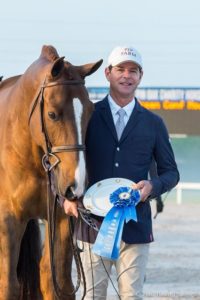 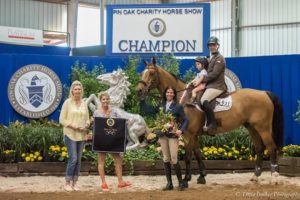 Texan Christian Heineking has been a frequent Pin Oak exhibitor over the years, but this time his journey to the show has a special meaning.

Heineking made a long-time goal of qualifying for the FEI World Cup Show Jumping Final a reality, and he’ll be traveling to Omaha, Nebraska, next week to compete against the best show jumpers in the world.

On his path to the World Cup Final, he made a special stop at Pin Oak and topped the $10,000 Welcome Stake with NKH Calango and placed fifth with NKH Caruso. Christian’s wife, Erin Davis-Heineking, also placed ninth aboard Ramona De Flobecq.

“The last time they jumped indoors was in Las Vegas in the beginning of November. So I thought it would be a good preparation to come here to Pin Oak and do a few classes,” said Christian. “And that’s why I’m just going to show today and tomorrow, and then I’m going to leave. I’m going to let them rest at home for a few days and then on Monday we’ll go to Omaha.”

Christian was pleased with his horses’ performances, and he’ll take Caruso as his primary World Cup horse and the younger Calango as his back-up mount.

“They felt good. I’m very excited,” he said. “The young one I pushed a little bit more than the older one today because he doesn’t have as many classes as Caruso. He responded well, and I was very happy with that. And Caruso felt good, too. We used to come every year, but the last couple years our schedule changed a little bit, and we weren’t able to come here. But they put on a great event, and we’re glad to be back.” 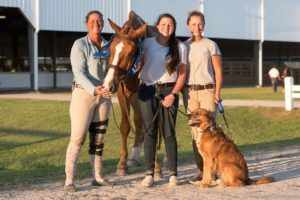 For months, SBS Farms’ Jersey Boy and Jennifer Alfano had each been out of the show ring due to injuries, and Alfano chose the Pin Oak Charity Horse Show to make, what turned out to be, a most successful return.

The pair even earned a score of 90 on their way to victory in both over fences classes in the 3’3″ Performance Working Hunters.

“It’s amazing to be back on Lewis (Jersey Boy),” said Alfano. “I did two Pre-Green horses this morning, and it was so fun to be back in the ring, but my knee was starting to hurt a bit. But having him at the end of the day, and to have him go like that after so long was really cool.

“When I was going around the course, I was so happy that I’m sure I had a grin from ear-to-ear,” she added. “And it was funny. Around the turn I looked in the schooling area, and every single person was standing still watching, and I was like, ‘Oh god! Come on Lewis!’ I think he was really happy, and to have him back is so fun.”

Alfano, of SBS Farms in Buffalo, New York, is considering showing the 15-year-old Lewis in the USHJA National Hunter Derby later this week, but since he’s been out of the show ring for nearly two years she’s taking it all day-by-day.

“Obviously, I want to bring him back slow and do it all right,” she said.

Alfano also credited her SBS Farms team for their support, from her injury in May at Devon until she was able to return to the show ring on Day No. 1 of Pin Oak.

“My girls at the barn, Alicia Heberle and Abby Strohmeyer, have been amazing through this whole thing and not just with Lewis but with everything,” she said. “Everyone at home, too, has stepped up and made this bearable for me. Everybody—Susie (Schoellkopf), Christy (Herrera), all of my people and my owners who have waited. Everybody has gone out of their way to make this OK for me, and that really means a lot.” 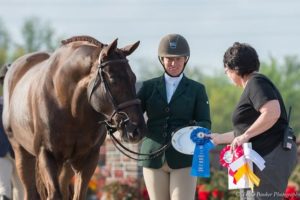 Even after pulling an all-nighter driving from California to Pin Oak, Professional Tommi Clark didn’t miss a beat in the High Performance Working Hunters. She guided Stephen Borders’ Extraodinaire to top calls in both over fences classes and placed second in the under saddle.

“We got here yesterday at 5 a.m., and he got off the truck. I didn’t ride him yesterday because we had to sleep, and he went right in the ring this morning and was a really good today!” she said.

This is Clark’s third year at Pin Oak, and she includes it as a spring destination show on her calendar. “It’s one of my favorite horse shows, along with Devon and the Pennsylvania National. I love when you walk on the grounds and everyone’s like, ‘Welcome to Texas!’ No matter who you run into, everyone’s friendly. It’s definitely why we come back here year after year.”

Clark brought five horses from her home base of Chosenbrook Show Stables in Agoura Hills, California, and three will contest the $30,000 USHJA International Hunter Derby, one will show in the $15,000 USHJA National Hunter Derby and one of her young horses may make his show ring debut. 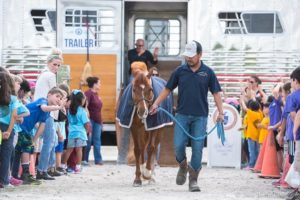 On opening day this year, more than 250 students experienced a day in the life of a world-class horse show!

Education Day, like every other facet of Pin Oak, couldn’t happen without volunteers. We thank the representatives from Texas Children’s Hospital, Ronald McDonald House Houston and several loyal Pin Oak board members and volunteers who served as group leaders.

Among many activities, students enjoyed watching Hunters and Jumpers compete, observed a veterinarian and farrier at work, toured a Johnson Horse Transportation semi-trailer and received a behind-the-scenes tour of the barns.