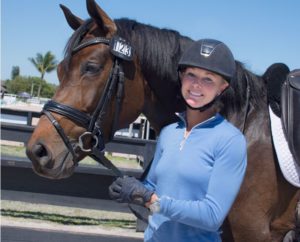 Wellington, FL (March 22, 2017) – International Grand Prix dressage rider and trainer Katherine Bateson-Chandler has recently added an exciting new prospect to her lineup. The 6-year-old Oldenburg mare, Fine Time, was secured for her by long-time sponsor Jane Forbes Clark. After returning to the show ring this season with her Grand Prix mount, Alcazar, Bateson-Chandler is both grateful and excited for the challenge and opportunity of competing with the new FEI hopeful.

Bateson-Chandler’s new ride, Fine Time–or “Angel”, as she is known at the barn– comes with some significant competition credentials. After being started in the stable of Danish Olympian Andreas Helgstrand, Fine Time competed as a 4-year-old, taking sixth at the 2015 Danish Young Horse Championships. At the 2016 World Championships for Young Dressage Horses, she was 11th in the 5-year-old final. The youngster went on to claim 7th place at the Danish Young Horse Championships before coming to America and finding a new partner in Bateson-Chandler this February.

“I feel so blessed to have an owner and friend like Jane to purchase this exceptional young horse to develop to Grand Prix,” said Bateson-Chandler. Bateson-Chandler added that she is especially grateful to Simone Pearce, who did much of the horse’s early training, saying “She has given Fine Time such an amazing start and also has been so kind and helpful to me in getting to know this special horse.”

When asked what she enjoys the most about her new partner, an ecstatic Bateson-Chandler revealed, “I think everything about her is special. She has everything I have been looking for: three stunning and correct paces and a fantastic character. What more could I ask? She has that special kind intelligent look in her eye. She knows she’s special in the most humble of ways.”

A committed equestrian and accomplished competitor, Bateson-Chandler makes a point to work with the very best mentors in order to ensure her horses’ growth and success. During the winter months, she works with U.S. Olympian Debbie McDonald while competing in Wellington, Florida. In the summer, Bateson-Chandler and her horses travel to the United Kingdom to compete and train with acclaimed British Olympic Gold Medalist Carl Hester.

Bateson-Chandler’s love of horses and passion for the sport of dressage began at an early age. After securing a job working as a groom for Robert Dover at the age of 16, Bateson-Chandler proved her mettle as a formidable and dedicated equestrian, eventually working her way up to the position of assistant trainer at Dover’s barn. In her time working with Dover, Bateson-Chandler accompanied him to two World Championships and two Olympic Games, and upon his retirement from competition in 2005, she took over the rides on many of his and Jane Clark’s horses.

Over the years, Bateson-Chandler has had many notable successes, including securing a place on the 2016 Gold Medal Dutta Corp. U.S. Team at the FEI Nations Cup, as well as on Team USA at the 2016 CDIO3* Odense Nations Cup in Denmark. In 2010, Bateson-Chandler represented the U.S at the Alltech FEI World Equestrian Games in Lexington, Kentucky. The team finished fourth and, individually, she and her mount, Nartan, qualified for the Grand Prix Special. With Alcazar, she hopes for a spot on the U.S. team at the 2018 World Equestrian Games in Tryon, North Carolina.

Today, through her business, KBC Dressage, Bateson-Chandler offers training and coaching services where her international experience ensures that students and horses have the competitive edge necessary for success in the dressage ring. In addition to training and competing, Bateson-Chandler also offers dressage prospect selection services to her clients. For more information about Katherine Bateson-Chandler, visit her on Facebook and at her web site at www.kbcdressage.com.

← SEMIFINAL CONTESTANTS SECURE SPOTS IN THE RODEOHOUSTON® SUPER SERIES CHAMPIONSHIP AND ARE ONE RIDE CLOSER TO $50,000
USA Comes Out Strong in First CDIO-U25 Nations Cup Competition at AGDF 11 →