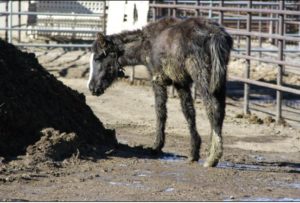 Photo by By Craig C. Downer

By Craig C. Downer, Wild horse and burro advocate and Wildlife Ecologist, Author of “The Wild Horse Conspiracy” available at www.amazon.com/dp/1461068983 or as signed copy at website: www.thewildhorseconspiracy.org.

I decided to check up on the wild horses and burros being held at BLM’s Palomino holding facility on St. Valentine’s Day, 2017, to see how they were doing after the heavy rains and strong winds from a series of storms that have been assailing western Nevada. What I encountered was very disturbing. Between November 1st and December 4th, 2016, 1,832 wild horses had been rounded up by helicopters from the vast Owyhee complex of Herd Management Areas in northern Nevada. Although only 18 deaths were reported from this largest of all BLM’s 2016 roundups, if fact many more died after capture at Palomino, as has been revealed by FOIA information obtained by AWHC. Twelve horses died in their pens, cause unknown, perhaps it was a broken heart! Ten horses succumbed to broken necks and limbs due to the violent nature of the roundups. Two died from colic, which is an agonizing death! Finally six horses were put down by BLM workers due to judged pre-existing conditions – in spite of their managing to survive up until the time of the roundups.  When I asked John Neill who oversees Palomino how many horses and burros were at the facility, he said there were around 1,500 there. So it is possible that over 300 have died, though I certainly hope these have found caring adopters. 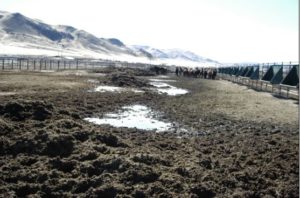 Photo by By Craig C. Downer

My inspection of the Palomino facility, has me very concerned. Due to the heavy rains there are many muddy pools and draws in the holding pens, and when mixed with the horses’ feces and urine, this is creating unwholesome breeding grounds for disease microorganisms. Diseases such as pneumonia could spread very rapidly, killing these horses, whose immune systems are already lowered due to the trauma they have recently experienced. I saw where BLM was attempting to clean away a lot of the wet mire with tractor blades and pile it into large hills, but so much remained. In general the penned horses were nervous and stressed, and I could tell that they had been through hell recently. Some of them looked up at me with hope in their eyes pleading with me to help them, but most turned away perhaps because of what other humans had just done to them. I am aware of how unfair a setup exists in the Owyhee Complex and how small the portions of the grazing allocation actually go to the wild horses, in spite of the provisions of the Wild Free-Roaming Horses and Burros Act, which clearly states in Section 2 c that land of the wild ones will be “principally devoted” to their welfare, not that of ranchers, etc. There are also too many barbed-wire allotment fences in the Owyhee Complex, which interferes with their legally guaranteed “free-roaming” lifestyle.

Also noticed where only several small wind barriers and slanted roofs to protect the wild horses and burros from sun and rain, wind and snow and hail. There were two new large roofs in one pen, but nearly all of the 10 large pens and 33 smaller pens were without any such shelter from the elements. The facility contains 148 acres and has a capacity of approximately 2,000 wild horses and burros. A workshop to deal with the lack of shelter at Palomino took place a couple years ago and a committee was assigned to improve the situation, but this remains to be accomplished. On July 7, 2016, Mr. Neill indicated that the Palomino Valley Center (PVC) “is working toward purchasing and constructing windbreaks and roofs in 4 perimeter pens that would serve approximately 500 animals.” However this remains to be accomplished and was obviously too late to provide comfort to the horses here now.

Please check out my photo essay revealing what I observed on St. Valentine’s Day, as these images tell of the tremendous suffering and depression that the terrorized wild horses have and continue to experience at Palomino. Palomino and other similar holding facilities throughout the US most definitely resemble concentration camps in many respects. As a professional wildlife ecologist I have presented and am proceeding with a Reserve Design proposal to stop this kind of cruel injustice and to restore long-term viable, naturally adapted and self-stabilizing wild horse and burro herds where they belong and have the legal right. Here they will be able to live in natural freedom upon the land and have adequate habitat to become truly viable herds. Check out the article I did for Horseback Magazine in March of last year for details concerning Reserve Design. It is entitled It is entitled “America’s Wild Horses and Burros Must Make a Comeback!” and the links to this three part article are http://horsebackmagazine.com/hb/archives/49953 and 50019 and 50053. Let me know if you have any questions or concerns at ccdowner@aol.com or contact me through my website.