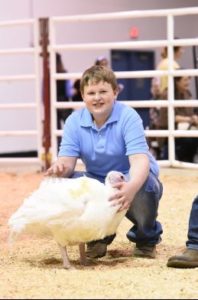 Buckholts FFA member Cooper Meinards, 16, earned Grand Champion Pen of Broilers. In his fifth year competing at the Show, Meinards said he has had help making it this far.

“A lot of people have been an inspiration, but Lana McDurnam got me started showing,” Cooper said. “She’s known me a long time and is a good family friend.”

The Reserve Grand Champion Pen of Broilers was shown by Kamryn Till, 11, of Wharton County 4-H. The Nada, Texas, native said her biggest challenge this season was getting up in the mornings, but it taught her responsibility.

“This season has been stressful,” Kamryn said. “It’s a lot of work, [but] it feels pretty awesome.”

“It’s fun and has been in my family since my dad was young,” Thomas said.

“My biggest inspiration is my dad,” Hewston said. “He helped me take care of the turkeys.”

Exhibitors will sell their broilers and turkeys in the Junior Market Poultry Auction, Friday, March 17, at noon.