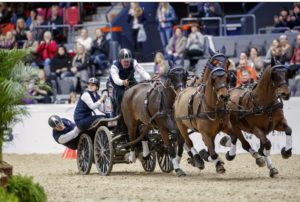 After a breath taking competition at the renowned Gothenburg Horse Show in Sweden, Boyd Exell (AUS) won the FEI World Cup™ Driving Final for the seventh time in his career. The silver went well deserved to Jérôme Voutaz (SUI) who was the winner the day before. Koos de Ronde (NED) took home the bronze.

Level 4 Course Designer Johan Jacobs (NED) had laid out a technical course with three obstacles and a brand new bridge, which suited most of the drivers. It was Jacobs’ first time as Course Designer at an FEI World Cup ™ Driving Final and his goal was to see controlled speed, which worked out well in the course.

After Competition 1 on Saturday, the drivers carried 50% of the time difference in seconds between the winner and themselves forward into today’s Final.

Boyd Exell had to make up 1,74 seconds to Jérôme Voutaz and decided to change his route to avoid making any mistakes like he had done the day before: “Today I was more focussed , I drove better. My horses were just as good as yesterday. It is always difficult to deliver a good round, but today it went really well.” After the first round, Boyd had an advantage of a little over four seconds to Jérôme, so he was the last man in. The Winning Round took place over a shortened course and Boyd drove fast and clear, securing his seventh World Cup title and the second one in Gothenburg. Boyd won his first ever Final in the Scandinavium in 2009.

Jérôme Voutaz was not amongst the top favourites before the Final but that changed quickly when he drove an impeccable round in Competition 1. Jérôme had never won a World Cup round before and was very pleased, but also felt the pressure of being the last starter in the first round of the Final. Jérôme turned his team of Freiberger horses very tight around the obstacles and set a good time. Unfortunately, one knock down prevented him from widening the gap with third placed Koos de Ronde. Before the winning round, the difference between De Ronde and Voutaz was only 0,53 seconds, but De Ronde knocked two balls down which gave Voutaz some air: “I was very pleased with my rounds and happy to be able to keep the pressure on. But I made a few mistakes with my rein handling, so I know I can be a little faster still, there is more to win with this team!” The Swiss auto mechanic is an amateur driver and used three of his outdoor horses, amongst which two dressage horses and a marathon horse, in his team today.

Koos de Ronde used a different horse in the lead of his team yesterday and decided to change back to his regular team for the Final. Koos was now able to change gear all the time and had a better feeling. Unfortunately he had two balls down, but because he put the throttle on after his second mistake, he qualified for the Winning Round: “The first ball was my mistake, but I was happy to be in the Winning Round. I didn’t expect that after two mistakes. I then knew I had to drive fast in order to win, so I took some risks and I had two balls down again. I was hoping for a podium place before the Final and I am pleased that I made it, despite the mistakes.”

Jozsef Dobrovitz (HUN) finished in fourth place, driving a team, which he had just put together for this Final, including two new horses. Dobrovitz drove clear, but his time just wasn’t fast enough to enter the Top Three.
Title defender IJsbrand Chardon (NED) had bad luck in Competition 1 where he knocked three balls down. Chardon had to make up over seven seconds to Voutaz and even though he gave his best and stayed clear, this wasn’t enough for a podium place.
Wild card driver Fredrik Persson (SWE) felt a little rusty on the first day as he had not been competing for two months, but he drove his team of nice, aged Swedish warm blood horses to the sixth place. The average age of his horses is 21 years old, but they are still fit as ever.

Georg von Stein (GER) was assisted by is compatriot and international four-in-hand driver himself, Christoph Sandmann, as his navigator. Unfortunately Georg had an error of course in the last marathon obstacle, which dropped him to the seventh place.