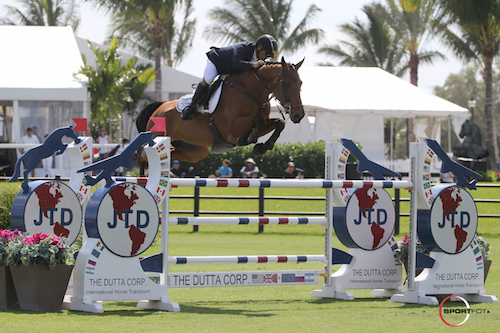 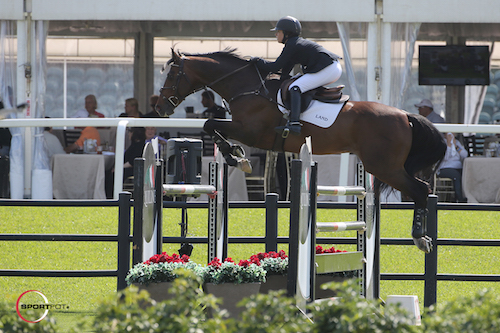 Taylor Land and For Edition 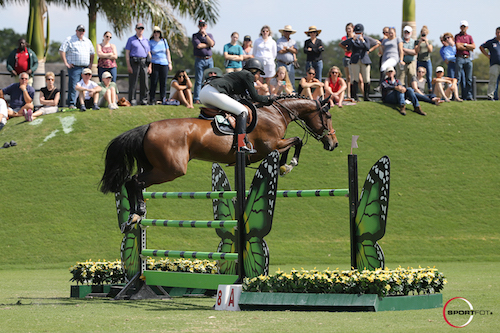 Nicole Shahinian-Simpson and Akuna Mattata
“I am very happy. I have had this mare for only ten months,” Vivero stated after his win. “She is very fast and very brave. We are a team now, and I think she going to do much more.
“She is fast, and I am very competitive,” Vivero detailed. “I just went fast and I trusted her today, and she was great.” 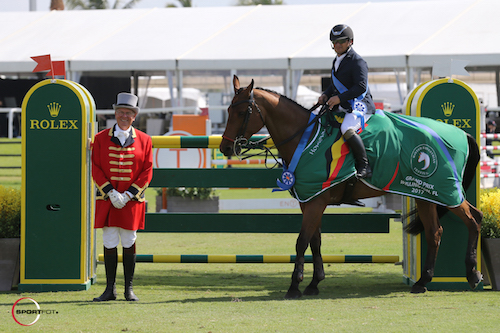 Diego Vivero and Bijoux in their winning presentation with ringmaster Steve Rector.
The pair earned two CSI 2* grand prix victories in Mexico last year, along with other national grand prix titles. In 2016, they also finished third in the $25,000 Nutrena Spring I Grand Prix competing post-WEF at PBIEC.
“I have been coming to Wellington for three years,” Vivero noted. “I am very happy to win because it is very competitive here and there are the most experienced and best riders in the world. It is very difficult, and it is good to win any class, but I am very proud to win here.”
Daniel Coyle Tops $35,000 Hollow Creek Farm Under 25 Grand Prix, presented by EnTrust Capital
The $35,000 Hollow Creek Farm Under 25 Grand Prix, presented by EnTrust Capital, was held on the derby field at PBIEC on Sunday morning with a win for Ireland’s Daniel Coyle riding Susan Grange’s Simba de la Roque. 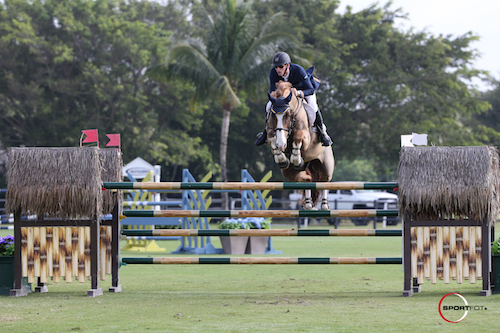 Daniel Coyle and Simba de la Roque
Course designer Richard Jeffery (GBR) saw 41 starters over his first round course, followed by a 15-horse jump-off with four double clear rounds. Coyle and Simba de la Roque were in a league of their own with the winning time of 36.28 seconds.
Hayley Barnhill (USA) finished second in 43.88 seconds riding Barnhill LLC’s Zephire. Emma Butchard (USA) guided her horse Brasil to third place in 45.05 seconds. Ailish Cunniffe (USA) and Whipstick Farm’s Casper placed fourth with their time of 46.80 seconds.
Simba de la Roque, an 11-year-old Selle Francais gelding (Kannan x Allegreto) was previously guided to numerous victories with Ireland’s Conor Swail before changing reins to Coyle this winter, who has already recorded an international victory with him.
“I have only had Simba a couple of months now, but even with Conor, and even before Conor, he was always a fantastic horse,” Coyle stated. “I had planned for today, so it was good that it all went to plan. I would have liked to go a little bit later in the jump-off so I did not have to go as quick, but thankfully it worked out alright.” 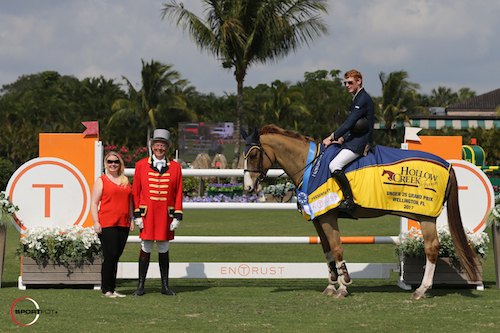 Daniel Coyle and Simba de la Roque in their winning presentation with Hollow Creek Farm representative Jennifer Ward and ringmaster Steve Rector.
Coyle was also the Under 25 Champion at the 2016 Royal Winter Fair and has the advantage of many new horses to ride for Susan and Ariel Grange’s Lothlorien Farm this year.
“I have been given an amazing opportunity by Sue and Ariel Grange,” he acknowledged. “To all of a sudden have all of these horses that have done five-star level that I have not done, I have gotten very lucky. I really like the under 25 because it gives me a chance to get to the next level with whatever horses I am unsure about. It is a really good class for me to get to know my horses so I don’t have to jump in something that I am not ready to do or the horse is not ready to do.
“The series is very important for me with Simba, for example, because it gives me a chance to get him ready for the next level through this.,” Coyle continued. “Simba definitely loves the grass, so I chose him for this. It is brilliant that these classes are now FEI, because realistically, they are just as hard to win really. That is not a small 1.45m by any means. It is important that they are now FEI because the jumps are the same height, but it gives us more experience being in the FEI environment.” 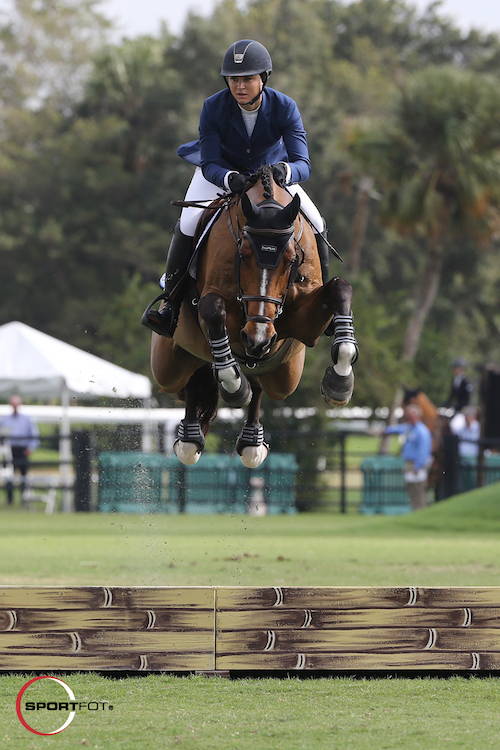 Hayley Barnhill and Zephire
Barnhill has ridden in the under 25 series for the last four years with the same mount, her 13-year-old Dutch Warmblood mare, Zephire (Coriano x Animo).
Remarking on her second place finish, Barnhill stated, “I knew there was no way that I would go as fast as Daniel, so I just wanted to jump a clear round and be quick enough. It worked out in my favor I think because everybody was trying to catch him, so a nice, smooth, clear round worked out for me.”
Barnhill has stepped Zephire up to the 1.50m level and enjoys the opportunity to jump in the under 25 classes to gain experience and jump confident rounds.
“She is a little bit older this year, so it gives you a goal and some real classes to do without having to jump the Saturday nights or bigger grand prix,” Barnhill noted. “This series has definitely helped her build up to the that level. Down here, even the three-star night classes are a little bit bigger than they are anywhere else, so it is nice to have these classes that she is really strong in.” 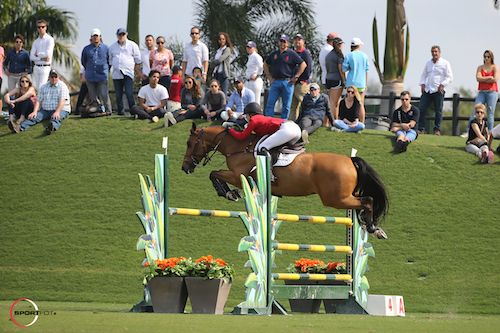 Emma Butchard and Brasil
Butchard jumped in the under 25 series for the first time in 2016, competing in two events to get her first 1.45m experience. This year, the rider has also moved up to the 1.50m level and has built her own confidence competing in the series.
Butchard feels secure with her mount, Brasil, an 11-year-old Dutch Warmblood stallion (Tenerife VDL x Farrington) that she has owned for one year.
“He brought me from the 1.10m up to the 1.50m now,” Butchard stated. “We call him the professor because he teaches me everything. He is the horse of a lifetime for me.”
She continued, “Today was our first time doing a jump-off at the 1.45m, so we were just trying to go clear. This year we are hoping to make it to the final.”
The Hollow Creek Farm Under 25 Grand Prix Series, presented by The Dutta Corp. in association with Guido Klatte, was expanded to ten events in 2017, offering a total of $245,000 in prize money for the season. Developed as a bridge to the international level of grand prix competition, the Series gives athletes, both human and equine, an opportunity to compete under a myriad of conditions; all important elements that competitors will face as their international careers progress. The series concludes with a $50,000 Hollow Creek Farm Under 25 Grand Prix Final, which the top 30 riders in the point standings will be invited to contest on Sunday, April 2.
Hooker, Ingram, and Arani Win WCHR Hunter Classics
Amateur and junior hunter riders took their last turns in the International Arena on Sunday. The classic round winners were decided by taking the highest overall score over two rounds. The top 12 combinations of the first round were invited back for a second round. A field of 64 riders vied for the Peggy Cone Memorial WCHR Adult Hunter Classic, but it was Nancy Hooker of Wellington, FL, who was victorious. 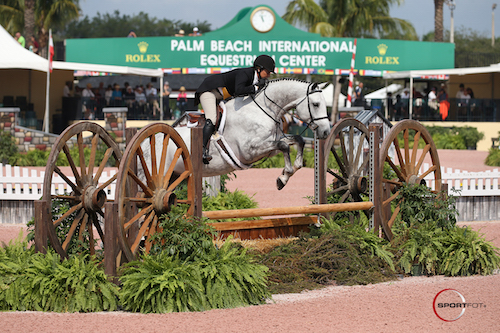 Winter Stroll and Nancy Hooker
After receiving the second highest score in the first round, an 87.00, Hooker came back and earned an 89.00. A combined score of 176.00 was enough for Hooker to take the win aboard Winter Stroll, an entry of Richard Prant. Consistency was key in the class as Lynn Rogers received similar scores of 86.50 and 88.00 in the first and second rounds, respectively, for an overall total of 174.50 and second place. Rogers rode her own Blue Point, a nine-year-old gelding that she’s been partnered with for five years. Rounding out the top three was Samantha Karp and Zentina B, with an overall score of 169.50. 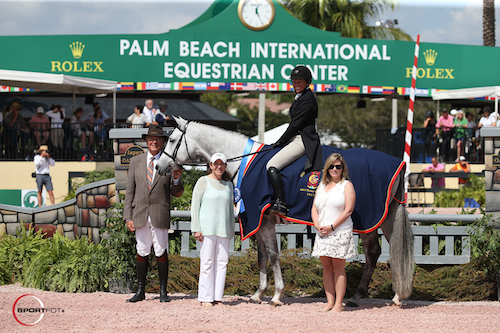 Winter Stroll and Nancy Hooker in their winning presentation with
ringmaster Steve Rector, Carol Cone, and Marla Holt of the USHJA.
Winter Stroll is a green six-year-old Warmblood gelding by Convento de Helle. “Week one of WEF was his first week of showing,” Hooker explained. “I bought him from my trainers, Ken Berkley and Scott Stewart. I was riding him a little bit this fall and fell in love with him. He’s got a funny personality and can get a little sassy. We’re still learning about each other. He lives in my backyard; I have my coffee and answer emails in the morning and watch him in the paddock.”
WCHR week is a big focus for Hooker’s trainers, Berkley and Stewart. “It’s a lot of fun because we all get behind each other and have a good time,” Hooker stated. “I love showing in the International [Arena] because they build it up, and the jumps are so fabulous. I had moments where I could take a breath out there, enjoy the jump, and how pretty it all was. It’s a real treat.” 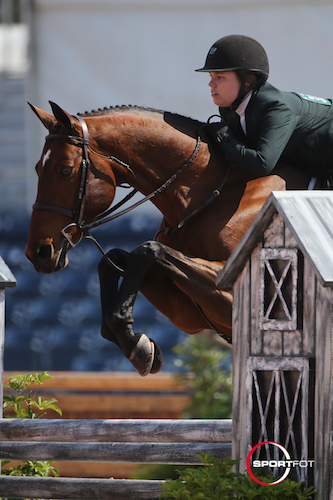 Fonteyn and Martha Ingram
Martha Ingram of Nashville, TN, captured the win in the WCHR Amateur-Owner 3’3″ Hunter Classic aboard Fonteyn, an entry of John and Stephanie Ingram, LLC. The pair’s score of 88.00 was the highest in the first round. A second round score of 87.25 brought their total to 175.25 and clinched the win.
Speaking of her 2004 German Sporthorse mare, Ingram said, “She’s so sweet and really tries hard to do everything right. She was staring at some of the things to the side of jump one, but she jumped it really clean and beautiful. I had a great flow on her throughout both rounds.” 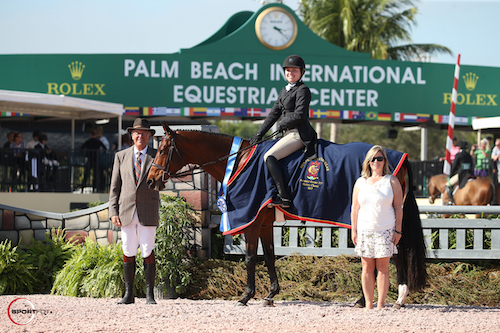 Fonteyn and Martha Ingram in their winning presentation
with ringmaster Steve Rector and Marla Holt of the USHJA.
Ingram splits her time between competing at WEF with her family and Greenville, SC, where she attends Furman University. Martha Ingram and her father, John Ingram, both qualified and participated in the highlight event of the week, the Peter Wetherill WCHR Palm Beach Hunter Spectacular, on Saturday evening.
“It’s amazing to show here with my mom and dad,” Martha Ingram exclaimed. “It’s a great time to do what I love and also be able to spend time with my family.”
Second place honors went to Kaitlin Porath of Charlotte, NC, and her own Breaux. Porath guided the nine-year-old Dutch Warmblood gelding by Verdi to scores of 85.00 and 87.00 for an overall total of 172.00. Margot Peroni and her 2009 gelding, Orlon, earned the third place ribbon with a total score of 167.00. 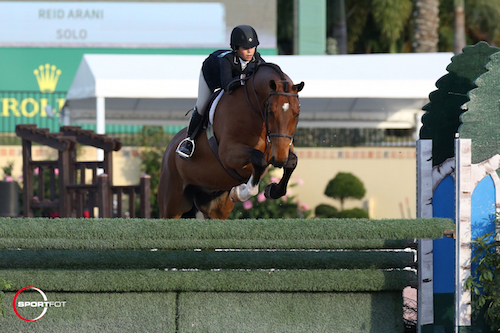 Reid Arani and Solo
Reid Arani of Lexington, KY, made her first class in the International Arena one to remember. Riding Molly Laughlin’s Solo, Arani won the WCHR Junior 3’3 Hunter Classic. The pair received first and second round scores of 80.00 and 84.00, respectively, for an overall total of 164.
“I’ve only been riding him the past two weeks,” Arani said of the nine-year-old Oldenburg gelding by Argentinus. “He felt really good. It’s nice to know he can show this late [in the day] in the International and be that good. He’s very sweet and playful and always kisses my hand.”
Narrowly missing out on the first place prize was Jordan Allen of West Bloomfield, MI. Allen and her own Empress finished just two points behind Arani with an overall score of 162. Stella Propp of New York, NY, and Morocco, an entry of Joe Currais, finished in third with a combined score of 159. 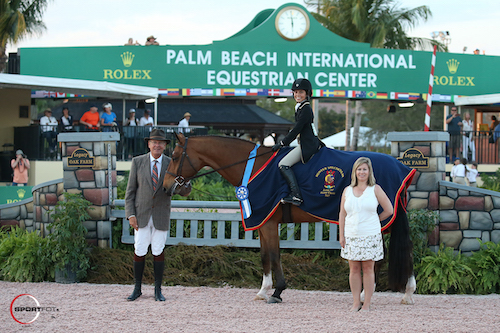