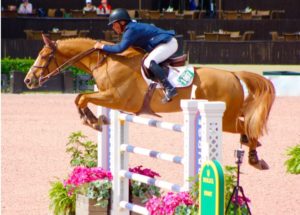 Wellington, FL (February 13, 2017) – Todd Minikus has once again topped the bill during week five of the 2017 Winter Equestrian Festival, claiming his fourth consecutive win of the week by placing first in the $86,000 Suncast® 1.50m Championship Jumper Classic. Minikus, aboard Wyndmont’s Zephyr, clocked in the final round at a swift 35.98 seconds.

Sunday’s win was just the cherry on top of a streak of victories for Minikus so far this season at the Wellington, Florida show series. The string of high-stakes wins that Minikus has already collected include three $35,000 classes, the $50,000 National Guard Grand Prix, and the FEI $216,000 Ariat® Grand Prix. Minikus and Zephyr also saw victory earlier this same week, having captured the first place title in the FEI 5* $35,000 1.45m class. As the blue ribbons continue to stack up for Minikus, the show jumping superstar is a top competitor to watch at this year’s Winter Equestrian Festival.

Many of Minikus’s exceptional results so far this season have been achieved aboard Zephyr, a 13-year-old Dutch Warmblood gelding (Landor S x Calvados), who is a newer mount for Minikus. “I have ridden so many horses in my life that there is not much that I have not seen or felt at this point,” Minikus said. “It does not take long for me to adapt to different horses really. I like that challenge of getting on new horses. When you are as old as I am, you don’t need much practice,” he joked.

Minikus’s wife and supporter, Amanda Minikus, was thrilled with this week’s results with Zephyr. “Todd started riding Zephyr in November of this past year, and this time they just nailed it. They really make a fantastic combination – every time they go out so far, they’ve been unbeatable.”

Minikus plans to continue with his impressive track record throughout the upcoming weeks of competition at the Winter Equestrian Festival, which runs through April 2, 2017 at the Palm Beach International Equestrian Center. It is the world’s largest and longest-running hunter/jumper show circuit, attracting top horses and riders from all over the world to Wellington annually.

Todd Minikus is a U.S. Pan American Games Team Bronze Medalist and FEI Nations Cup veteran with well over 100 Grand Prix wins under his belt. In addition to competing nationally and internationally, Minikus also offers sales and training services. To learn more about Todd Minikus, visit www.ToddMinikusShowJumping.com and follow him on Facebook and Instagram @Todd_Minikus.