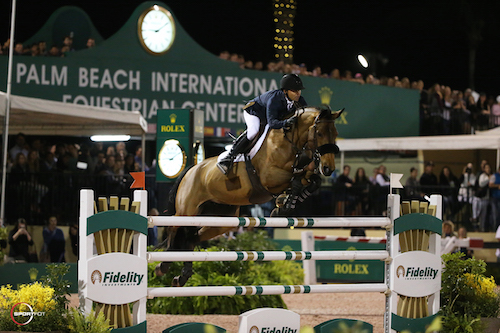 Kent Farrington and Gazelle
Course designer Robert Ellis (GBR) saw 40 competitors jump his first-round track for the five-star event under the lights. Eleven advanced to the jump-off, where three jumped double clear in the race against the clock. Farrington and Gazelle emerged victorious with a time of 44.48 seconds. De Azevedo finished second with Comic in 45.69 seconds, and Tyree guided Bokai through the timers in 48.29 seconds. Canada’s Eric Lamaze rode Artisan Farms and Torrey Pines Stable’s Fine Lady 5 to the fastest four-fault round in 45.65 seconds to place fourth.
Farrington, who is currently the number two-ranked rider in the world, put in a thrilling jump-off round with his own and Robin Parsky’s Gazelle to ensure victory. He jumped the 11-year-old Belgian Warmblood mare (Kashmir van Schuttershof x Indoctro) to a team bronze medal in the 2015 Pan American Games in Toronto, among other top international finishes.
Speaking of his winning round, Farrington stated, “My plan in a jump-off is usually to play to the horse’s strengths unless there are only three in it, then maybe you have a different strategy. Coming after me are Fine Lady and Eric Lamaze, and they are an incredibly competitive combination. They are super fast against the clock, so my plan was to do what I thought the limit was for my horse and put the pressure on him to have to really chase me to win. I knew if we were both running, his horse is probably faster in this type of arena, so I tried to put the pressure on him and hope he would have one down. Luckily for me it worked out tonight.” 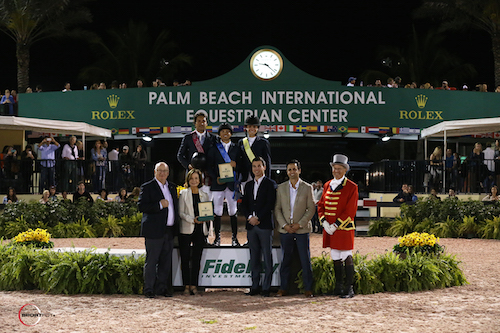 Luiz Francisco de Azevedo, Kent Farrington, and Catherine Tyree in their presentation with Equestrian Sport Productions President Michael Stone; Gazelle’s owner Robin Parsky; Dustin Longest, Sports Marketing Associate, Rolex Watch USA; Peter Petrone, Vice President, Financial Consultant Fidelity Investments®, Boca Raton Investor Center; and ringmaster Steve Rector.
Commenting on the first round course, Farrington added, “After walking, I thought a lot was going to depend on the time-allowed. I thought maybe he wanted the time-allowed a touch shorter in an ideal world so that there were not quite so many clear, but the jump-off was still difficult enough, so you probably ended up with the same spot anyway.”
De Azevedo was aboard his ten-year-old Dutch Warmblood stallion Comic (Verdi x Heartbreaker) for Saturday’s top finish as he gears up for week eight’s CSIO Nations’ Cup competition.
“I am very happy because for me, it is like a win to be second behind Kent Farrington,” the rider stated. “For me, it is like a victory. I am really happy with my horse. We bought him when he was just a six-year-old, and we built him. My goal was to be here where we are now, so I have to just thank God for that.” 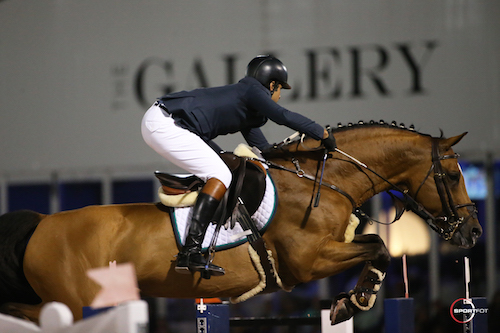 Luiz Francisco de Azevedo and Comic
Tyree began the 2017 season with a third-place finish in week one’s $75,000 Rosenbaum Mollengarden PLLC Grand Prix aboard Mary & Joe Tyree’s Bokai, an 11-year-old Dutch Warmblood (Up To Date x Ferro) gelding that she began riding in July. On Saturday, Tyree earned her highest five-star finish and also received the award for Leading Lady Rider for the second time this winter, presented by Martha Jolicoeur of Douglas Elliman in memory of Dale Lawler. 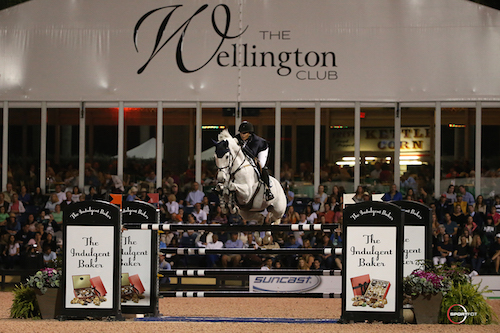 Catherine Tyree and Bokai
“This was my first five star with him,” Tyree stated. “It is a relatively new partnership, and I really just tried to go in and have a smooth jump-off. I’m a little bit new to going quick at this height. I knew I had Kent and Eric after me, and chances were they were going to be a little bit quicker, so I thought I would go for a smooth, clear round, and he jumped fantastic.
“To even be jumping these classes is absolutely amazing,” Tyree continued. “It has always been a dream of mine to jump Saturday nights, and to be sitting next to these two riders and this company is something I have really wanted and have worked toward. To finally accomplish that has been an absolutely amazing feat. It really takes an entire team. I have great people behind me. The past year has been a little rough, but it ended up being a fairy tale at the end. I could not be happier.” 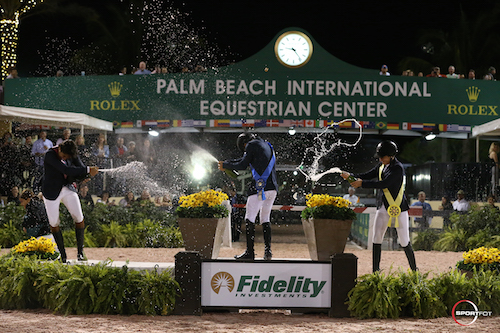 The top three celebrate with a champagne spray.
Also competing in the International Arena on Saturday, Kelsey Thatcher and Pony Lane Farm’s Everything won the $15,000 SJHOF High Amateur-Owner Jumper Classic, presented by Engel & Völkers. Emma Heise and Old Willow Farms’ Broekie were the winners of the $10,000 SJHOF High Junior Jumper Classic, presented by Sleepy P Ranch. Jennifer Jones and Andrew Kocher’s Benedetto were also victorious in the Equiline Medium Amateur-Owner Jumper speed class.
Lindsay Maxwell and Technicolor Crowned Champions of Lugano Diamonds Amateur-Owner Hunter 18-35
Lindsay Maxwell of Beverly Hills, CA, and Technicolor topped a competitive field of 17 riders in the Lugano Diamonds Amateur-Owner Hunter 18-35 division on Saturday morning. Maxwell piloted Technicolor to three first-place finishes, two over fences and one under saddle, to earn the championship. The pair was also named champion of the division during week one of the 2017 WEF. 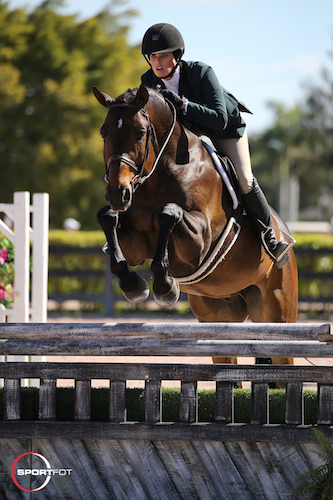 Lindsay Maxwell and Technicolor
“He’s an exceptionally talented horse,” Maxwell detailed. “I feel really lucky to ride him every time I go in the ring. At the barn, he’s constantly in your pockets and wanting to be all over you. He’s a very people-oriented horse, really sweet, and he always has his head out looking for attention.”
Technicolor is a coming seven-year-old Oldenburg gelding by Sandro Boy that Maxwell purchased about a year ago from Nick Haness in California. Last year, Haness successfully rode the gelding in the First Years while Maxwell showed him in the Amateur-Owners. Maxwell noted that the course was well suited to demonstrate Technicolor’s talents as the pair received a high score of 87 in one of the over fences classes.
“The course was set up really well for him,” Maxwell explained. “He loves a long run to an oxer; it really showcases his spectacular jump. His jump is unlike anything I’ve felt on any other horse, so it’s really fun when I have a nice, long run to an oxer like that. I can really let him shine. The rest was just smooth and nice.” 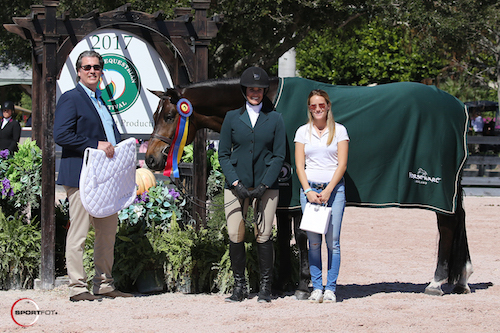