Jessica Springsteen and Tiger Lily
WEF 5, sponsored by Fidelity Investments®, features CSI 5* competition through Sunday, February 12, 2017. Highlights include the $130,000 Ruby et Violette WEF Challenge Cup Round 5 on Thursday, the $380,000 Fidelity Investments® Grand Prix CSI 5* on Saturday, as well as the $86,000 Suncast® 1.50m Championship Jumper Classic and the $50,000 Equo Grand Prix CSI 2* on Sunday. Live streaming for the week is available HERE. The 12-week WEF circuit continues through April 2, 2017, awarding over $9 million in prize money.
2012 Olympic course designer Robert Ellis (GBR) began the week with 76 entries in Wednesday’s 1.45m speed class,and had 25 clear rounds. Last to go, Springsteen guided Stone Hill Farm’s Tiger Lily to the win in 57.27 seconds. She bested the lead previously held by Leslie Howard (USA) riding Laure Sudreau’s Donna Speciale in 58.36 seconds. Brazil’s Luiz Francisco de Azevedo and Collin placed third in 59.42 seconds. Shane Sweetnam (IRL) and The Blue Buckle Group’s Cobolt finished fourth in 59.65 seconds.
“I saw a lot of rounds before I went today,” Springsteen said of her winning track. “I knew what I had to do, which is always a nice advantage of going last. I actually added strides in places where other people left out, but she is just so fast on her own. I don’t even have to kick; I just loosen the reins and she goes.” 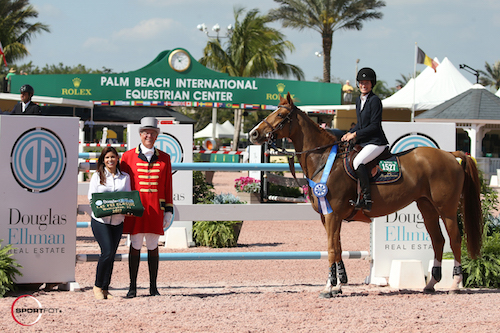 Jessica Springsteen and Tiger Lily in their winning presentation with Jasmine
Velez of Douglas Elliman at the Polo Club and ringmaster Steve Rector.
Springsteen purchased Tiger Lily, a ten-year-old Oldenburg mare (Balou du Rouet x Domino), at the end of 2015. The pair showed in Wellington for the first time last winter and spent the 2016 season traveling around the world.
“She is very feisty,” Springsteen described. “She always wants to go, so I have to do my best to keep her stride short and together. She is jumping again tomorrow, so I was not sure if I should go forward today, but she has so much energy that it was a good course for her. She felt great.”
While previously training with Edwina Tops-Alexander and Jan Tops in Europe, Springsteen found Tiger Lily showing under Massimo Grossato of Italy.
“I actually was not even supposed to try her,” Springsteen detailed. “When Edwina and Jan were going to see her, I just decided last minute to go with them. I immediately loved her.”
Also competing in the International Arena on Wednesday, Amanda Derbyshire (GBR) and Gochman Sport Horses’ Sibell BH won the $8,000 Douglas Elliman CSI 2* 1.40m speed. 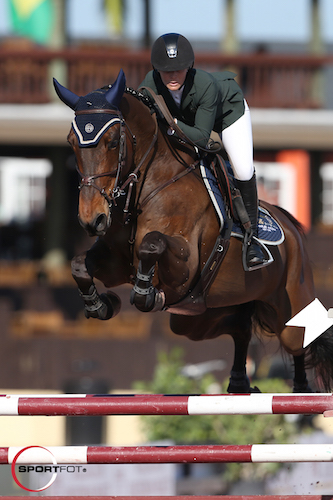