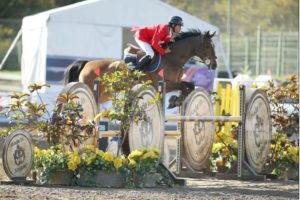 The host nation dominated the podium when the FEI Children’s International Classics Final 2016 came to a close with a thrilling four-horse jump-off at Guadalajara yesterday, where Carlos Rodolfo Molina claimed individual gold for Mexico ahead of compatriot Lorenzo Mills Hegewisch in silver, while Germany’s Lilli Collee took bronze medal spot.

Once again these popular Championships were well supported throughout the qualifying series, and a total of 32 young people from 13 countries – Argentina, Brazil, Canada, Colombia, France, Germany, Guatemala, Japan, Lithuania, Mexico, New Zealand, South Africa and Venezuela – battled it out for the coveted medals at the deciding event. The athletes, all aged between 12 and 14 years, shared the fantastic facilities at Guadalajara Country Club with the senior riders competing in the Longines FEI World Cup™ Jumping 2016/2017 North American League Western Sub-League qualifier at the same venue, and enjoyed a wonderful welcome from the Organising Committee.

Host nation athletes are permitted to bring two of their own horses to the Final, but the visitors compete on horses provided by the event so their challenge is even greater. Once again however the youngsters demonstrated their enormous talent by rising to that challenge to provide a week of superb competition that began with the first Qualifier last Wednesday.

The eventual silver medallist, 13-year-old Lorenzo Mills Hegewisch, finished sixth here behind Canada’s Jenna Lee Gottschlich (Carentana), and both of these made a dramatic improvement when Mills Hegewisch won the following day’s Jump-Off competition and Gottschlich lined up second while first-day winner, Quintana Melgoza finished third. Carlos Rodolfo Molina jumped clear in the first Qualifier but finished well down the order in eleventh place, and a fence down in the jump-off on the second day pinned him back into eleventh place once again.

However he made the cut into the top-16 Final decider yesterday, and with the only double-clear of the competition was undisputed champion.

The remaining 16 riders battled it out in the Farewell class earlier yesterday, and the result set the tone when Mexico took the top three places, Mauricio Neumann Priess (Corlinus) winning through by almost two seconds ahead of Cristopher Gerard Jardon Serur (Frequent Flyer) while Manuel Senderos Elizundia (Annen) finished third. The first of the visitors to make it into the line-up here was Canada’s Jade Fowler (Germane) who slotted into fourth.

In the Final competition for the medals, only four found the key to the first-round track set by course designer Olaf Petersen Jr., with both Mexico’s Isabella Viviana Estrada Delgado (Vernal Queen) and New Zealand’s Sophie Townsend (Conchita) missing out by the narrowest of margins when over-running the time allowed of 71 seconds for a single time fault apiece. Canada’s Gottschlich had to settle for seventh place with a single fence error in the quick time of 66.71 seconds.

Germany’s Lilli Collee was first against the clock with the 13-year-old grey stallion Campanola Chaco with which she established a great relationship during the week. However an angled ride to the vertical second-last fence saw them dropping a rail for four faults in 35.37 seconds.

Molina was next into the ring and really piled on the pressure with a great clear from the 13-year-old mare Ferry who broke the beam in 35.20 seconds to set the new standard. And when Brazil’s Lys Katherine Park Kang, who finished ninth and tenth in the first two competitions with the black gelding Cobain S, hit the second fence and crossed the line in 36.55 seconds, then that left a place on the podium still up for grabs as, last to go, Mills Hegewisch set off.

It was a real test of nerve for this 13-year-old after knocking the very first obstacle, but he didn’t let it get to him as he galloped around the rest of the track to shave more than three seconds off the target time to guarantee himself the silver medal and deny Park Kang a place on the podium.

“I never competed in a Final like this before and it has been an incredible experience for me and all my friends and family!” said silver medallist Mills Hegewisch who has been riding the lovely 14-year-old Caruschka for the last two years.

It was a double celebration for bronze medallist Lilli Collee because yesterday was also her 14th birthday. “I only managed to qualify for the Final when another rider was withdrawn so I’m very excited to be here!” she said. “In the first competition I jumped clear but in the second class I had a fence down in the jump-off. My plan for the jump-off today was to be clear and it didn’t happen but I was fast. My horse was very brave, he’s a stallion and I really like him. We’ve had a great time here in Mexico and I’m very happy with this result in my very first FEI international class!” she added.

“Everyone here this week did a good job!” said newly-crowned gold medallist Carlos Rodolfo Molina. “I’m very proud of course, I never imagined this moment would happen and I’m very excited to be here! I’m also very happy to have had such a very nice week with my friends and to be competing against riders from all the other countries” he added. Then, following a long-held tradition for winners in Children and Pony Championships, all three medallists were quickly brought back to earth when they were carried by their fellow-competitors for a celebratory dip in the nearby swimming pool.