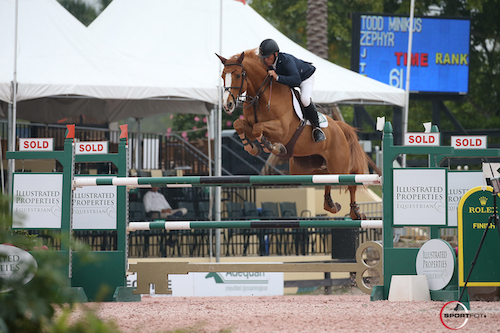 Todd Minikus and Zephyr
Emily Moffitt (GBR) and Poden Farms’ Zagahorn finished second in 66.47 seconds. Laura Chapot (USA) aboard her own and McLain Ward’s Quointreau un Prince placed third in 68.33 seconds, and Richie Moloney (IRL) riding Ypaja Yando ended fourth in 68.45 seconds.
Zephyr, a 13-year-old Dutch Warmblood gelding (Landor S x Calvados), is a catch-ride for Minikus and a new mount this winter. Though the team at Wyndmont takes care of preparations and Minikus only rides the horse at the show, he feels that their partnership is developing well.
“He seems like he is getting more confident in my style of riding. He feels a little more flexible through his body, and he has had a great week,” Minikus stated. “A horse you push is always faster than a horse you pull, and you definitely push him along. I like that style of riding. I have only ridden him for a few weeks now, so I think he is starting to understand my style, or maybe I am starting to understand his style. Either way, it is going well.”
Minikus changed plans a bit while on course, but made his horse’s large stride worked to his advantage in the speed track.
“It looked like there were several options when I walked it, but then as I was going, they did not show themselves as well as I was hoping,” Minikus explained. “Zephyr did a very nice job of turning back on the last combination. He is a little funny turning to the left, but for whatever reason today, he did it quite well. I think that is really where it worked out for me.”
In addition to top prizes, Illustrated Properties presented special leading rider awards to Minikus as the highest-placed professional rider in the class, and Moffitt as the highest-placed non-professional rider. 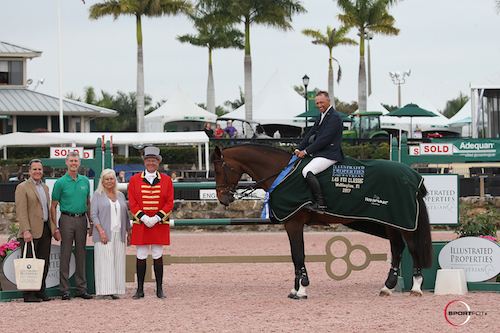 Todd Minikus in his winning presentation (Quite Cassini
standing in for Zephyr) with Mike Pappas, Jim Corbin, and
Joy Linet of Illustrated Properties, and ringmaster Steve Rector.
Also competing in the International Arena on Thursday, Jimmy Torano (USA) and Excellent B were victorious in the $6,000 Illustrated Properties 1.40m speed class. The $6,000 FEI 1.40m was won by Georgina Bloomberg (USA) riding Gotham Enterprizes’ Manodie II H.
Lisbeth Hazoury took top honors in the $2,500 Engel & Völkers High Amateur-Owner Jumper Power and Speed riding Grey van de Castanoschans, owned by Los Establos Sporthorses Corp. Luciana Gonzalez Guerra concluded the day with a win in the $1,500 Sleepy P Ranch High Junior Jumper Power and Speed riding Star Light, owned by Guadalupe Gonzalez.
Jef Lauwers Champion in the Adult Amateur Hunters 18-35 Section A at WEF
Jef Lauwers of Belgium and Cupid, owned by Lindsay Holstead, captured the championship in the Adult Amateur Hunter 18-35 Section A division. The pair earned two blue ribbons, fifth and sixth over fences, and fifth under saddle. Lauwers first rode in the hunters over two years ago with Peter Pletcher of Magnolia, TX. He did not compete much at that time, and has since spent the past two years working in Belgium as an engineer. He returned to the U.S. six weeks ago and has been intently focusing on riding and the hunters.
“Peter asked if I wanted to show. I told him yes, but that I didn’t have a horse,” Lauwers detailed. “Then, Lindsay said I could show her horse. We showed in Texas for two weeks and then came here. This is my first show in Wellington.” 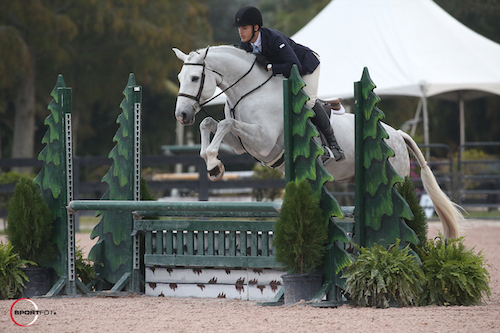