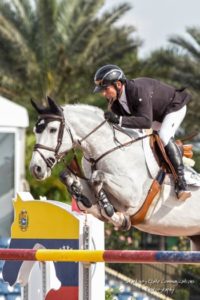 A total of 80 starters attempted the track set by course designer Luc Musette of Belgium with 15 producing clear rounds to qualify for the jump-off.  Lamaze’s last victory came in the €300,000 Rolex Top Ten Final in Geneva, Switzerland, in December, where Musette was also the course designer.  Lamaze once again found his way to victory over the shortened jump-off course for the WEF Challenge Cup Round III, leaving all the rails in place and stopping the clock in 40.55 seconds to push U.S. Olympic team silver medalist Leslie Howard into second with a time of 41.38 riding Gentille van Spieveld.

“Houston is an up and coming horse that is part of the Artisan Farms team of horses,” said Lamaze, who added an individual bronze in Rio to the individual gold and team silver medals he won at the 2008 Beijing Olympic Games.  “He’s a horse that really came on strong towards the end of the year last year and did some great things.  He’s got all the talent in the world.  When you have a string of horses that can go fast, like Fine Lady and Rosana du Park, he never truly had a chance to show off last year, but he was getting some great mileage at a lot of competitions.  This is his time to step up, and we couldn’t be happier with how he’s coming along.”

Houston is one of several horses that Lamaze will be showing at the international level throughout the 12-week Winter Equestrian Festival.  During last year’s Winter Equestrian Festival, Lamaze won a total of four Ruby et Violette WEF Challenge Cup events riding Rosana du Park, Check Picobello Z, and Fine Lady 5.  This year, Houston is the first horse to have his name on the list.

“It’s a horse that we’ve had for about two years,” said Lamaze, who divides his time between training bases in Wellington, FL, and Brussels, Belgium.  “I have been in many jump-offs with him, but I never really asked for speed because I didn’t feel like the timing was right.  Now I feel like his time has come, and it’s his time now to learn it.

“Every horse develops on its own schedule and in its own time, and it’s really important to have owners who understand the process and are patient,” continued Lamaze, who is currently ranked number eight in the world.  “The Zieglers are wonderful that way, and really understand the sport.  A lot of the time we invest years, and the owners invest time and money, into bringing these horses along, so it’s nice when you finally get there.  I plan on using Houston all along on this circuit; I think you’ll see a lot of him.”

Joining Houston in grand prix competition at this year’s Winter Equestrian Festival will be Fine Lady 5, Lamaze’s individual bronze medal partner at the 2016 Rio Olympic Games.  Lamaze will ride the 14-year-old Hanoverian mare (Forsyth x Drosselklang II), also owned by Artisan Farms, in the $130,000 CSI3* Adequan Grand Prix on Saturday night, January 28.  He will be competing against his student, 21-year-old Kara Chad of Calgary, AB, who qualified for the Saturday night grand prix for the second week in a row through her impressive results in the Ruby et Violette WEF Challenge Cup.