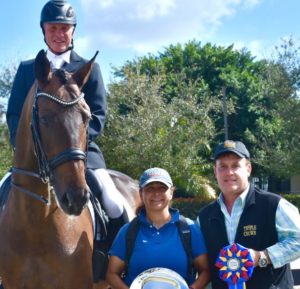 Wellington, FL (January 24, 2017) – Triple Crown® Nutrition, a U.S. company known for its high caliber feed products and scientifically-based nutritional formulas, has found no shortage of ways to contribute to the excitement at the onset of this year’s equestrian competition season in Wellington, Florida. Triple Crown began by hosting its annual Season Kickoff Party for all of the riders who flock to south Florida for nearly three months of dressage shows, polo matches, and hunter/jumper competitions. Then, the company got down to business and presented the first-ever Triple Crown Dressage Excellence Award at the 2017 Adequan Global Dressage Festival.

Upon arrival to The Wellington Club, party guests were given the full royal treatment with complimentary hors d’oeuvres, beverages, and a raffle drawing to win exclusive Triple Crown prizes. Many guests even joined in the fun by donning their very own golden crown for the evening. A huge part of the festivities was a “Think it and Ink it” temporary tattoo contest, where party guests competed to see who could come up with the most creative Triple Crown temporary tattoo placement. The three contest winners of the evening were Eva Wallace, Lena Wendenmark, and Nick Bertelli.

“We all felt it was an incredible success,” said Triple Crown Florida Representative Craig Bernstein. “I’ve had so many people come up and tell me how much they enjoyed it. That’s the best part – that we have the opportunity to bring everyone together to celebrate this amazing event, and in that way we show our support to the community.”

Triple Crown continued supporting the equestrian community by presenting the very first Triple Crown Dressage Excellence Award at the 2017 Adequan Global Dressage Festival. Triple Crown will continue to present this award throughout the duration of the show series, which concludes on March 25. The award honors riders who exemplify exceptional commitment to the sport of dressage, and whose accomplishments and continual dedication make them a role model within the sport. The first award was given out to esteemed dressage rider Jan Ebeling.

A seasoned dressage veteran who started riding at age six, Ebeling is no stranger to the fundamental concepts of hard work and commitment that inevitably go into creating a successful competitor. When asked what motivates him to put in the long hours and challenging work required to achieve excellence on a daily basis, Jan credited his passion for the sport and innate love of horses in general.

“I’m a horse nut! So, I have no problem getting up at five in the morning, riding the tractor, and prepping the arena so I can ride. It’s the lifestyle that I’ve chosen and that I love.”

Originally from Germany, Ebeling has been riding and competing in the United States since immigrating to the country in 1984. Among his long list of notable accomplishments are competing on the USA team in the 2012 Olympics in London, showing and competing the World Cup in 2007, 2009, 2011, and 2012, and competing in shows such as Hagan, Aachen, and throughout Europe.

Triple Crown was proud to reward Ebeling for his extraordinary success in dressage. The company is an official sponsor of the 2017 Adequan Global Dressage Festival, and will also be supporting the White Fences Equestrian Center, Wellington Classic Dressage, and the Gold Coast Dressage Association in Wellington this winter. Triple Crown is also the official feed of the US Equestrian, and the official feed sponsor of the U.S. Dressage Team, the Land Rover U.S. Eventing Team, and the Hermes U.S. Show Jumping Team.

The company is based in Wayzata, Minnesota, and manufactures feeds using revolutionary formulations and premium ingredients. Triple Crown was the first company to add prebiotics, probiotics, and organic minerals to horse feed. Triple Crown’s EquiMix® Technology enhances the digestibility and absorption of quality fiber sources with amino acids and key vitamins and minerals. To learn more about Triple Crown, visit Facebook or Instagram @TripleCrownFeed, or visit the website at www.TripleCrownFeed.com. For particular inquiries about Triple Crown Florida, contact Craig Bernstein at (561) 543-4526.