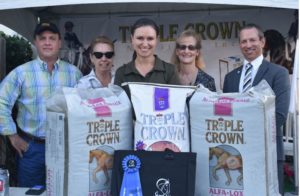 Wellington, FL (January 24, 2017) – Judges were dazzled by the impressive turnout of Olympic athlete Adrienne Lyle and Betsy Juliano’s 10-year-old Oldenburg mare Horizon (Hotline-Revue, Don Schufro) and they awarded the pair the Triple Crown® Best Turnout Award at the FEI jog ahead of the Adequan Global Dressage Festival (AGDF) II. As her prize, Lyle was presented with bags of Alfa-Lox® Forage from Triple Crown®.

The rider knows that first impressions are important at a CDI jog. “The jog is the first time you present yourself to the jury and having a professional, polished image is important,” Lyle said. She learned how to present her horse like an in-hand professional presenter when she ran her Olympic mount, Wizard, in the jogs. The show will be Horizon’s first foray into the CDIs.

FEI 3* dressage judge Lee Tubman agreed with Lyle, “I actually won a lot of these awards and I’m very particular and very meticulous. When I saw you come up, it’s exactly what you said: It’s the first time that I’m seeing you today. It’s your business card. It looked really good. I’m impressed.”

Noreen O’Sullivan, show manager for the event, said, “The horse and rider were such a presence that, hands-down, it was a no-brainer decision.”

The jog took place near the ShowChic trailer on the AGDF showgrounds at the Palm Beach International Equestrian Center. ShowChic sponsors the jog and provides refreshments and a shady spot for judges, competitors and spectators at each jog throughout the 12-week season.

Triple Crown® was established in 1989 and was the innovator in adding prebiotics, probiotics and organic minerals to horse feed. Headquartered in Wayzata, Minnesota, the company sells products primarily through independent feed distributors located across the United States. Triple Crown® Nutrition, Inc., is the Official Feed Sponsor of the U.S. Dressage Team, the Land Rover U.S. Eventing Team, and the Hermes U.S. Show Jumping Team.

You can learn more about Triple Crown® feed at www.triplecrownfeed.com.