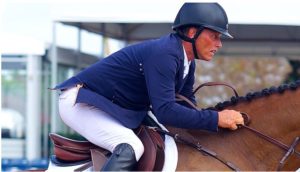 On day two of this year’s winter competition season, Minikus piloted Valinski S, a 12-year-old Dutch Warmblood gelding, to first place in the $35,000 WEF Challenge Cup. Of the 52 entries in round one of the WEF Challenge Cup, only 10 advanced to the jump-off. Minikus and Valinski S completed the course in 37.99 seconds for the win. Valinski S competed this past summer in the 2016 Olympics in Brazil, and is owned by Ronnie Beard and Wyndmont, Inc.

In reaction to his WEF Challenge Cup win, Minikus stated, “Valinski also won the Grand Prix last week, so that’s two classes in a row for him, which is outstanding. Wyndmont has a great team getting those horses ready for me. I just ride them here in the ring. They are doing a good job and making it easy for me, so I can’t take all the credit. I think he is going to certainly be very competitive this winter. He wants to be a true winner and he has all of the necessary things – scope, carefulness, quickness – and I think we are going to have a lot of fun.”

In addition to the Challenge Cup victory, Minikus also skillfully navigated Wyndmont’s up and coming prospect Cas, a nine-year-old Dutch Warmblood, to win the $6,000 1.40m class at the Winter Equestrian Festival on January 12.

The Winter Equestrian Festival at the Palm Beach International Equestrian Center is the largest and longest-running hunter/jumper show circuit in the world. With so many blue ribbons already under his belt so early in the competition season, Minikus and his team of elite horses are sure to leave a lasting impression.