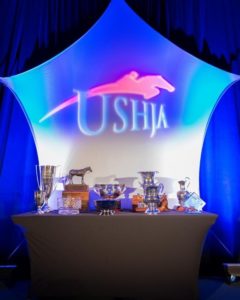 Lexington, Ky.- The United States Hunter Jumper Association is excited to announce the recipients of 2016 annual awards, including the Amateur Sportsmanship Award, Lifetime Achievement Award, Youth Leadership Awards and other prestigious year-end awards, that will be presented at the USHJA Annual Meeting in Palm Springs, California, Dec. 13.

“These awards are really special because they are all about members recognizing other members for their tremendous contributions,” said Cheryl Rubenstein, chair of the USHJA Awards Committee. “We were thrilled with the incredible nominees we received, and we are very much looking forward to honoring them at the USHJA Annual Meeting Evening of Equestrians this year.”

USHJA awards will be presented at the USHJA Annual Meeting Evening of Equestrians on Dec. 13 in Palm Springs, California. Photo credit: Tricia Booker
The Lifetime Achievement Award honors members whose lifelong involvement in the sport and with USHJA has benefited the industry. Recipients have dedicated their lives to furthering the disciplines of hunters and jumpers on a national platform. This year, Chrystine Tauber, of Wellington, Florida, and Raymond Francis, of Centreville, Maryland, will be presented with the Lifetime Achievement Award.

Tauber’s experience in the hunter/jumper sport is well documented and spans decades with international show jumping wins at the top of the sport. She worked for the U.S. Equestrian Team, where she managed two Olympic teams, two Pan American Teams and two World Championship teams. She was part of the initial Board of Directors for the USHJA and was instrumental in the founding of the organization. She served as executive director of the American Horse Shows Association, and 2016 marked the end of her term as president of the USEF. She’s also an experienced USEF and FEI judge and has served in many volunteer capacities within sport governance over the years.

Francis’s contributions as a trainer, judge, and rider in the hunter sport are well known. Francis and his wife Cheryle own Offington Stables, where his roster of top hunter and equitation riders, as well as hunter breeding horses is extensive. He is an inductee of the Hunter Hall of Fame and recipient of the Pennsylvania Horse Show Association Lifetime Achievement Award, USEF Pegasus Medal of Honor, and the National Professional Horseman’s Association’s Frank Hawkings Lifetime Achievement Award.

The Amateur Sportsmanship Award was created to recognize Amateur Owner and Adult Amateur exhibitors who display excellence and integrity by supporting fellow competitors and volunteering their time and resources to various aspects of the industry. This year, Nancy Crary Jones,of Little Rock, Arkansas, will receive the 2016 Amateur Sportsmanship Award for her contributions to the sport. Jones has been involved in the sport for more than 30 years as an accomplished rider and owner. Jones is a “R” judge, the affiliate liaison and a board member for the Arkansas Hunter/Jumper Association, and an active USHJA Zone 7 committee member.

Both the USHJA Youth Leadership Award and USEF Youth Sportsman’s Award were created to identify potential future leaders in the industry and recognize their achievements. These recipients display commitment to USEF and USHJA by promoting equestrian sport and demonstrating exemplary sportsmanship while serving as a role model for their peers. This year, Ella Doerr, 13, of Wellsville, Pennsylvania, was selected as the Youth Leadership Award recipient, and Chloe Bellerive, 17, of Keedysville, Maryland, was USHJA’s nomination for the USEF Sportsman’s Award.

Other 2016 Award Recipients:
• Jane Marshall Dillon Award: Patty Ball (Penryn, Calif.), Glenn Moody (Charlottesville, Va.) and Joan Waterman (New Caney, Texas)
• Jeannie and Hunter Harrison (Wellington, Fla.) are the recipients of the Mrs. A.C. Randolph Owners Legacy Award. The award acknowledges past or current owners who are or have been a true patron of the hunter jumper industry by creating a legacy of giving back to the sport through dedication and support.
• Mike Puffer (Roscoe, Ill.), and Denise Wiemers (Fresno, Calif.) will receive the Vital Horse Show Staff Award for the East and West coast, respectively. The award honors support staff who often work behind the scenes but are essential to the success of our horse shows.
• Andrew Kocher (Stockton, N.J.) is the recipient of the Dash for Cash Award, which honors the rider that earns the most prize money in $25,000-$40,000 grand prix events that are held as feature events at licensed USEF competitions.
These awards were elected by the USHJA Executive Committee based on the recommendation of the Awards Committee, which solicits nominations from the USHJA membership. Recipients of the awards, along with other USHJA awards, will be honored Dec. 13 during the Evening of Equestrians President’s Reception, presented by USHJA Zone 10 and Pacific Coast Horse Show Association, at the USHJA Annual Meeting in Palm Springs, California.