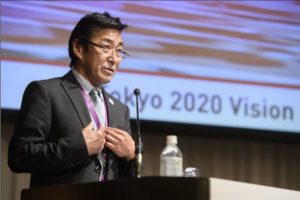 Aki Murasato, Executive Director of International Relations with the Tokyo 2020 Organising Committee, gave National Federations a view of what is come at the next Games at today’s FEI General Assembly in the Japanese capital today. (Richard Juilliart/FEI)

“We all agree that we have the greatest sport on earth and this is for many reasons”, the FEI President said. “We excel when it comes to gender equality, but what makes our sport so great is the unique bond between human and animal, between man and horse. But it is this same unique value which makes our sport vulnerable.

“With the growth of our sport grows also our responsibility to continuously ensure the welfare of our athletes in order to safeguard the integrity of the sport at all times.

“We need to insist on a strict application of our rules. They need to be transparent, clear and not open for interpretation. We need to be irreproachable in our stance and our outlook. These are big challenges.

“There are organisations – increasing in number – that are of the opinion that horses should not be competed or even ridden!

“We need to show them – and the world – that we are not only dedicated to horse welfare but that we are the leaders in that domain. And we also need to educate – to show just how much we do and how committed the equestrian community is to horse welfare. Ignorance creates fear. So we need to show that a true partnership is about trust and respect so that we can bridge that gap and bring people closer to our sport.”

During a packed morning agenda, delegates voted on a number of important issues, including the Olympic and Paralympic format change proposals (see FEI press release here), formats for the FEI World Equestrian Games™ 2018 and other sport specific matters. Full details of the main decisions made at the FEI General Assembly 2016 are here.

The afternoon featured a series of presentations, including an update on the Tokyo 2020 Olympic and Paralympic Games from Aki Murasato, Executive Director of International Relations with the Tokyo 2020 Organising Committee.

Mark Bellissimo, creator of the Tryon International Equestrian Center, also addressed delegates, providing an update on the venue that was earlier this month announced as the host for the FEI World Equestrian Games™ 2018.

Speaking directly to the FEI President, Mark Bellissimo said: “We want to let you know that we appreciate how important this event is to the FEI, and how important it is both for us as organisers and the community that we work within. We will do our best not to let you down.”

Nai Yue Ho (SIN), outgoing Chair of FEI Regional Group VIII, who was celebrating his birthday today, was made an Honorary Bureau Member of the FEI. And prior to closing remarks, the FEI President thanked the Japan Equestrian Federation (JEF) for their hospitality, commenting on the fact that it had been 25 years since the FEI General Assembly had been held in Tokyo, and in the same hotel. He then made a presentation to Tsunekazu Takeda, President of the Japanese Olympic Committee and Vice-President of the Tokyo 2020 Organising Committee, and to JEF Secretary General Dr Yasuhiko Haruta, who also collected a special plaque on behalf of JEF President Dr Genshitsu Sen.

In his closing address, the FEI President said: “This was a very important General Assembly. We took crucial decisions for the future of our sport and I understand that not everybody was happy, but we followed a very democratic process and in the end there was a clear majority. There are no winners or losers in this debate. These new formats give us a huge responsibility and failure is not an option, so we need to work together with all our stakeholders to prepare for Tokyo 2020.”