Toronto, Ontario – A highly-competitive field of 17 horse and rider combinations from across Canada will contest the $15,000 Braeburn Farms Hunter Derby on Sunday, November 6, at 1 p.m. and the $25,000 Knightwood Hunter Derby for the Lorna Jean Guthrie trophy on Tuesday, November 8, at 7 p.m. at the Royal Horse Show in Toronto, ON. 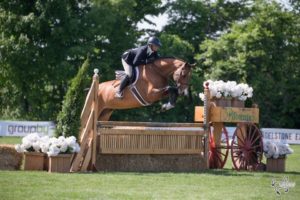 Erynn Ballard of Tottenham, ON, will be back to compete in the Canadian Hunter Derby
National Champions on November 6 and 8 at Toronto’s iconic Royal Horse Show.
Photo by Ben Radvanyi Photography

The star-studded field features the best derby horses in the country as well as several past Canadian Hunter Derby National Champions competing in the sixth edition of the event, including:

– Darcy Hayes, two-time winner of the $25,000 Knightwood Hunter Derby at The Royal riding Say When, owned by Danielle Baron. Say When successfully competed in the 2015 USHJA Derby Championships in Kentucky with great results and placed second in the $50,000 International Hunter Derby at the 2015 Winter Equestrian Festival in Wellington, FL. Hayes has won ten Canadian Hunter Derby titles in the history of the series. At The Royal, Hayes will also be riding Crush, the 2016 Ontario Amateur-Owner Hunter Champion with Cawthra Burns

– Two-time National Champion Ryan Roy will be riding Bayridge, the 2014 National Champion and the winningest combination in Canadian Hunter Derby History. Roy and Bayridge are competing in their sixth consecutive National Finals, trained by Randy Roy.

– Cawthra Burns was the top amateur competitor in the 2015 Canadian Hunter Derby National Championships and will be back to contest her sixth National Derby Championship title.

– Sam Pegg, a hot, young professional rider who is also competitive in the grand prix jumper division, placed fourth in last year’s $25,000 Knightwood Hunter Derby at The Royal. Pegg will ride Corby and Harraby, both trained by Mark Hayes.

– Carly Campbell-Cooper and California, winners of the last qualifier of the year in the eastern division, and the only qualifying event to be held indoors.

Making the event even more visually appealing, and keeping in line with true hunter derby competition, several generous jump sponsors have stepped forward to support this year’s event. Several new fences will be featured as well as refreshed old favorites. The black Riviera gate with swoop rail will be back again this year.

Tickets for the Royal Horse Show can still be purchased by visiting royalfair.org or ticketmaster.ca.

For more information on the Royal Horse Show, the marquee event of The Royal Agricultural Winter Fair, visit royalfair.org/horse-show. A complete horse show schedule can be accessed here.