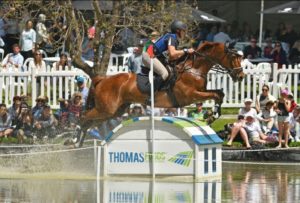 Hazel Shannon (AUS) felt the benefit of a Thoroughbred when she rode Wendy Ward’s Clifford to add just 0.4 of a time penalty to take the lead in today’s cross country phase of the FEI Classics™ at the Australian International 3 Day Event in Adelaide (AUS).

It was the second best cross country run of the day and the chestnut gelding looked like it was making easy work of the cross country course and looked fresh over the line.

“I could not have asked any more of him,” said Shannon. “By the time I got to the end of the course, he did not feel like he had just completed a four-star. He felt as if he could have gone again. Whatever you point Clifford at he will do his best to get over it.”

Shannon and Clifford, which is named after the grandfather of the owner Wendy Ward, now have the lead of the FEI Classics™ in Adelaide by just 2.50 penalties – all eyes are now on tomorrow’s jumping phase.

“He is a careful jumper. We will just go in tomorrow and do our best and whatever happens, happens,” concluded Shannon.

Will Enzinger and Wenlock Aquifer, leaders after yesterday’s dressage phase, were first out on today’s cross country, and made the course look easy coming home with a surprising 3.2 time penalties to slip to second place.

“He was just on song,” said a delighted Enzinger. “Everything I asked him to do he did. I was a bit surprised to get time penalties, but there were a couple of times I just balanced a little bit to make sure I got the line and that’s the price you pay. He is a happy horse and still fresh and I could not be happier.”

From Jumping to Eventing

Interestingly, the only clear round of today’s FEI Classics™ cross country phase came from the Warmblood, Rebecca Zamel’s Evergem Perfection ridden by Victorian professional athlete Andrew Cooper. The effort moved them from seventh to third place on 59.70 penalties.

“He was amazing,” said Cooper. “He had two run outs in the four-star last year, which was down to greenness, but he has had a full year of three-star competition and that experience showed. He never looks fast, but he is so adjustable and I took a few inside lines. He can just land and go. He was purchased as a showjumping horse, so I can only hope he remembers that tomorrow.”

Rohan Luxmoore, third after yesterday’s dressage, had a run out at 14b (Horseland Hollows) on Bells ‘N Whistles. He was in good company as Stuart Tinney with War Hawk, Shane Rose and Glenorchy South Park and New Zealand’s Andy Daines on Spring Panorama all had a run out at the same skinny fence.

The cause of the problem was a ditch – an obstacle that has been sorting horses out since eventing began. It did not pose a problem as such, but it did take the horse’s eyes off the skinny one stride away.

Today was mild and sunny and claimed to be the best weather experienced on cross country day at Adelaide since the event began in 1997. The beautiful parkland was packed with spectators who enjoyed a day of exciting horse sport.

Tomorrow’s jumping, the final phase of the FEI Classics™ at the Australian International 3 Day Event in Adelaide (AUS) – second leg of this prestigious series uniting the world’s six four-star eventing competitions – will be live on FEI TV.