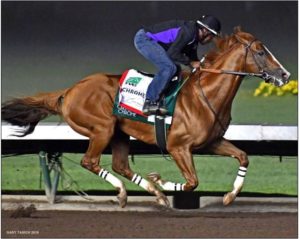 The action begins on Thursday with Billy’s Shoot-Out Six Handicapping contest boasting a $1,000 guaranteed payout. The track used in the contest is Churchill Downs with an 11 a.m. first post time.

All wagering opportunities will be offered at Billy’s Sports Book on each Santa Anita racing day.

Players will have the advantage of wagering on the world’s premier thoroughbreds in these races.

California Chrome, winner of the 2014 Kentucky Derby and Preakness, has earned $13,432,650 and could be in the best form of his career. The Art Sherman-trained horse has won each of his six 2016 starts, including the $10-million Dubai World Cup and the $1-million TVG Pacific Classic.

Robert “Bat” Masterson’s Tepin will defend her triumph in last year’s $2-million Breeders’ Cup Turf Mile. The earner of more than $4 million showed she is among the best turf milers in the world this year when she traveled to Ascot near London to win the prestigious Queen Anne Stakes, the highlight of an eight-race winning streak.

Depth and class will be present in Friday’s Longines Breeders’ Cup Distaff with champions Songbird, Beholder and Stellar Wind.

Songbird is unbeaten from 11 starts for trainer Jerry Hollendorfer. None of her rivals have raced to within three-and-three-quarter lengths of the Medaglia d’Oro daughter. The Jerry Hollendorfer-trained filly has won seven Grade 1 races, including her latest four starts.

The veteran Beholder has earned more than $5 million and is always dangerous. The Richard Mandella-trained mare has two Grade 1 wins and three second-place finishes from her five 2016 starts.

Stellar Wind has defeated Beholder in her two latest starts, the Grade 1 Zenyatta and the Grade 1 Clement Hirsch. She could be the improving competitor in this race with those two classy victories. She was beaten by Beholder three starts ago in the Grade 1 Vanity Mile.